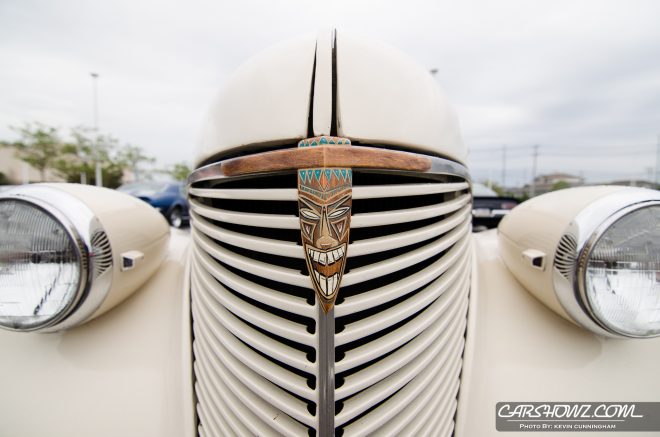 Cruisin Ocean City 2016 by Kevin Cunningham, Seahamm Photography – The morning of Saturday, May 21st was overcast and cool.  It was the perfect day to sleep in.  So, it only makes sense that I was up and out of bed by 4:45 a.m.  There are very few days throughout the year that I forego sleep and rise before the first bird songs without being forced to.  All of them involve car shows.  This Saturday was my chance to see and capture Cruisin’ Ocean City for the first time and I wasn’t going to miss it!  Unfortunately, my day job kept me from attending earlier in the week so I was determined to make the most of it.  I had seen posts of beautiful cars on the event’s Facebook page starting early in the week and had been studying the forecast like a Red Bull infused meteorology student cramming for an exam since Wednesday.  It was calling for heavy rain all day but Eastern Shore weather forecasts change more often than Bruce (Caitlyn??) Jenner changes his (her??) gender so I was holding on to my optimism and positivity to make the rain magically go away.* I grabbed my coffee and danish at the gas station and drove my bitchin’ 2007 Kia Optima East on Route 50 towards Ocean City.

Before I go further, I wanted to write a little bit about what the event was billed as.  This year was the 26th time that the annual event was held in Ocean City.  The organizers estimated the attendance of over 3,500 vehicles over four days.  The organizers also arranged for Steve Darnell from “Vegas Rat Rods”, Alexandra Paul from “Baywatch” and the movie “Christine”, as well as the Christine Show Car and the Doo Wop Project.  A long list of big name vendors was provided and the event organizers also arranged for the OC Collector Car Auction on Thursday and Friday, as well as the extremely popular Boardwalk Parade Thursday, Friday, and Saturday mornings.  By all accounts this was shaping up to be a fantastic show.  As long as the weather held out.

I parked on 12th Street at 6:30 a.m and walked up a couple streets to the boardwalk.  I wanted to catch the parade before I grabbed my pass and checked out the shows at the Convention Center and Inlet.  I walked up towards the end of the boardwalk to see which vehicles were in the queue and wasn’t disappointed.  I heard the engines before anything else.  That deep, rough, choppy growl we all know and love.  I turned the corner and saw a Cadillac Hearse, a couple Chevelles, and other assorted beauties.  I found my spot on the boardwalk down near 12th street and waiting for the parade to begin.  It turned out that those few minutes of uninterrupted enjoyment were the best of the day.**

The cars crept slowly along the boardwalk, maybe 50 in total, towards the inlet as the rain moved in.  It was tentative at first so my hope remained that it was going to be an awesome day filled with hot rods, classics, and beautiful shots to post for carshowz.  The first sign that I was completely wrong was at the Convention Center.  I rolled in to get my pass at 8:50 a.m. to about ten show cars parked in the designated area.  My first thought was “Oh no, this is going to be like OCCS ’15.”***  It was still a little early so I still maintained some optimism but it was waning.  Inside were some vendors who were trying really hard to get me to sign up for anything and everything, The Christine Show Car, and a handful of other really detailed rides.  It was still early, so I chalked the lack of people up to the hour.  I started the long process of getting down to the inlet almost immediately and ended up parking in the same spot on 12th Street again and hoofing it down.  That long walk opened my eyes to two truths.  The first being that any hope for good weather was futile.  While it wasn’t a downpour, the rain was coming down in a steady, drumming pace; it was there to stay.

The other realization I came to was that Cruisin’ Ocean City was being taken over.  I saw dozens of current cookie cutter Mustangs, Camaros, Challengers, and jacked up diesels rolling along the streets.  While I have an appreciation for all of vehicles, it was a little agitating.  There are a number of other shows in Ocean City for those exact vehicles and Cruisin’ Ocean City is not one of them.  Sure, it’s a (mostly) free country and there are no laws against driving in Ocean City whenever you feel like it, but this is a respect issue.  Do the rods and classics come in droves to OCCS or Jeep Week to clog up the roads and steal the attention from the appropriate genre?  No.  Would I have an issue if those dozens of diesels and modern muscle cars came down and parked to enjoy the show?  Not at all.  What I have a problem with is a weekend that is set up for a specific class, genre, and era being taken over by vehicles with little or nothing to do with the event.  It’s rude, it’s disrespectful, and it’s indicative of the narcissistic attitude enjoyed by so many people recently.  I can’t blame the men and women who took to the Facebook event page to vent their frustrations with coal-rolling and the snail-paced movement on the roads in Ocean City.  I’d be furious too.

I digress.  I finally made it to the Inlet portion of the show amid the steady rain with one final hope.  I held on to the possibility that maybe, just maybe, it would redeem the rest of the morning.  I showed my hand stamp to security, walked in, and that was when everything I had in mind for Cruisin’ Ocean City came crashing down.  I had seen so many photos from Friday that made me believe I could stick out the rain just to capture a few truly beautiful rides but when I saw the inlet had MAYBE fifty cars (and a van) I was crushed.  Maybe I didn’t look hard enough or maybe I didn’t travel north enough.  Maybe I was too early or maybe I should have called in sick to work on Friday.  Any way you cut it, Cruisin’ Ocean City was a bust for me.  That’s not to say it was a bad event or no one had fun.  Quite the contrary, actually.  From the posts I was seeing on Facebook, the week leading up to Saturday looked like a BLAST!  Thousands of custom rides, hundreds of burnouts, plenty of cops (it IS Ocean City after all), and a ton of fun to be had.  But I missed it.  I grabbed a few final shots as the rain picked up again and called it a day.  It’s a little frustrating, to be completely honest, but to all those ladies and gentlemen who made the trek across states to showcase your vehicles and all the RESPECTFUL show-goers I’d like to say a big “thank you.”  Thank you for sticking it out and offering me the opportunity to enter your world, even if I didn’t get the full experience.  Also, whoever owned that silver Austin Healey parked at the inlet in the rain, “you da real MVP” as the young whippersnappers say.

*I have no bias against any race, gender identity, sexuality, etc. etc.  I form opinions on individuals and refuse to group everyone of similar demographics in with each other.  I have held fast and strong to the idea that each human being on this planet is different and we all have a purpose to serve.  This is not a transgender joke, I just think that whole family is a circus and I take every opportunity I can to use them in jokes.

**This post is obviously my personal opinion.  My commentary should in no way detract from the dedication, hard work, and positivity put out by the event organizers.  No one can control the weather (that I know of) so my experience has absolutely nothing to do with the show set up, how it was run, or desire of vehicle owners not to park their cars in the rain.  My expressed disappointment is aimed solely at the weather.

***OCCS ’15 refers to the Ocean City Car and Truck Show in June of 2015.  I have attended that show almost every year for almost a decade and last year had the lowest attendance and enthusiasm by far.  Again, I mean no disrespect to event organizers.  My comments are merely an observation.