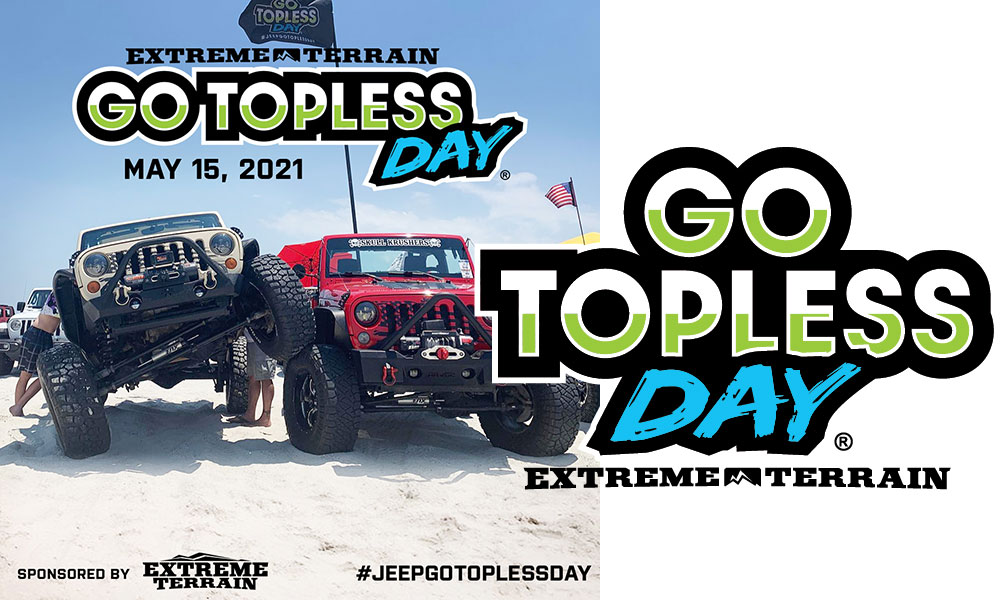 Extreme Terrain Go Topless Day: ExtremeTerrain announced today it will once again serve as the official sponsor of the 14thAannual Go Topless Day® on May 15, 2021. Go Topless Day is a worldwide day of festivities hosted by Jeepers to celebrate the annual tradition of removing their vehicle’s tops for the summer.

Each year, more than 20,000 Jeep drivers and clubs celebrate “going topless” by hosting events like picnics, trail runs, giveaways, convoys, trail clean-ups, parades, beach parties, and other social outings while raising hundreds of thousands of dollars for charity. This year, ExtremeTerrain is providing extra resources for Jeep clubs and organizations around the world to host their own Go Topless events and raise money for local 501c charities of their choice.

“For every Jeep lover, that glorious day when they can take the top off their car marks the unofficial start of the summer,” said Steve Voudouris, CEO and co-founder at ExtremeTerrain. “We’re thrilled to host this year’s national Go Topless Day® celebration. Taking part in a Go Topless Day by attending or hosting your own event is a great way to celebrate with other Jeepers, while raising money for a good cause. For Jeep fans who don’t have a Go Topless event nearby, ExtremeTerrain is making it easier than ever to host your own event.”

Since 2018 Go Topless Day has raise over $130,000 for charity. As this year’s official sponsor, ExtremeTerrain is helping to expand the impact of Go Topless Day and has pledged to contribute an additional $500 to any host that raises at least $500 for their local registered 501c charity of choice. Hosts can access “club t-shirt packs” at a discounted rate to resell at their Go Topless Day event. Extreme Terrain is also giving away free event decals to attendees, plus gift cards and prizes to those who display their Go Topless Day swag and merch on social media using the hashtag #JEEPGOTOPLESSDAY.

Go Topless Day was created in 2008 as a small meet up of Jeepers at a local farm stand in Central Massachusetts. More than a decade later, Go Topless Day is a worldwide event with more than 240 events across 45 states, 11 countries and over 20,000 Jeeps participating.