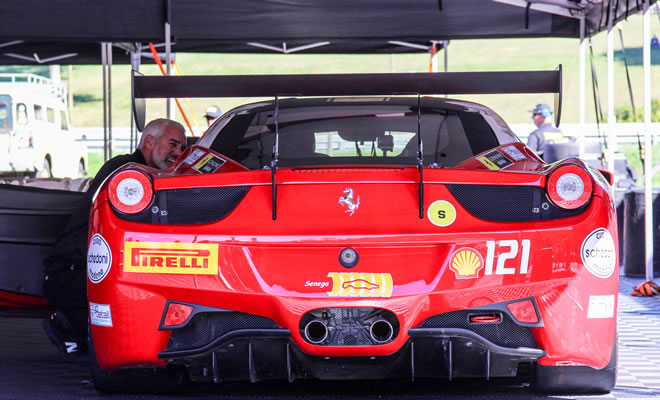 Ferrari Challenge North America kicked off at Lime Rock Park in Lakeville, CT. Our friend Tony Sheng was visiting over the weekend and grabbed us these awesome shots from the event. Check out Tony’s coverage below.

More about the Ferrari Challenge North America via races.ferrari.com: Lakeville, 23 September 2016 – The sun blazed above the wooded area surrounding the 1.5-mile circuit of Lime Rock Park. Today marks the opening day for the fifth round of the 2016 North American Ferrari Challenge season, and also the first time the drivers would compete in utterly dry conditions. At each racing event this year, drivers from the Coppa Shell, Trofeo Pirelli AM and Trofeo Pirelli classes have competed under various “wet” conditions; some have been with a slight moisture on the track while others were bestowed beneath incessant downpours. However, the drivers and their 458 Challenge EVOs were ready for the pristine track conditions with a dry, autumn air and deep azure skies.

Two races. Due to the track’s length and the number of cars competing on track, the Coppa Shell and Trofeo Pirelli/Trofeo Pirelli AM classes were separated, still all competing for the championship points. In addition, racing is not permitted on Sundays within the grounds. Therefore, there was not just one race today, but two 30-minute sprint competitions.

Trofeo Pirelli and Pirelli AM. The Trofeo Pirelli and Trofeo Pirelli AM drivers were the first to take to the track in the early hours of the afternoon. And the race proved to be exhilarating for the Tifosi sitting high above the hills at the Big Bend turn. As the drivers attached the front stretch, a couple, like Carlos Kauffmann (Ferrari of Ft. Lauderdale) lost their momentum with the pack racing, but others like Arthur Romanelli (The Collection) gained the advantage and were unstoppable. The competition for second position between Marc Muzzo (Ferrari of Ontario) and Steve Johnson (Ferrari of Ft. Lauderdale) provided the greatest delight for spectators as they danced to lead one another. Ultimately Muzzo took the advantage going into the No Name Straight midway through the race, as Kauffmann tactfully regained his position for Trofeo Pirelli, also marking the fastest lap today with a 56:035 during the race. Ultimately, he would be the grand victor for the Trofeo Pirelli class, with Wei Lu (Ferrari of Vancouver) coming in second position, and Nick Mancuso (Lake Forest Sportscars) finishing in third. Romanelli, running like an unstoppable bullet (he also set the fastest lap in 56:243), finished first in his Trofeo Pirelli AM class, leading Muzzo who came in second and Johnson placing third.

Coppa Shell. In his rookies season, Matt Keegan (Ferrari of San Francisco) captured the pole and first place win for the Coppa Shell class. But Keegan maintained a constant eye for Jean-Claude Saada (Boardwalk Ferrari) and the current championship leader, Joe Courtney (Miller Motor Cars). The three were head-to-head throughout the second race of the day, projecting the correct line and racing demeanor. Karl Williams (Ferrari of Beverly Hills) also maintained wind, staying close to Courtney’s tale and finding every chance for an overtake. The battle for a top five finish would be contended by Chris Cagnazzi (Ferrari of Long Island) and Rob Hodes (Ferrari of Washington) who set the fastet lap in 56:734. In the end, Saada finished second today and Courtney in third.