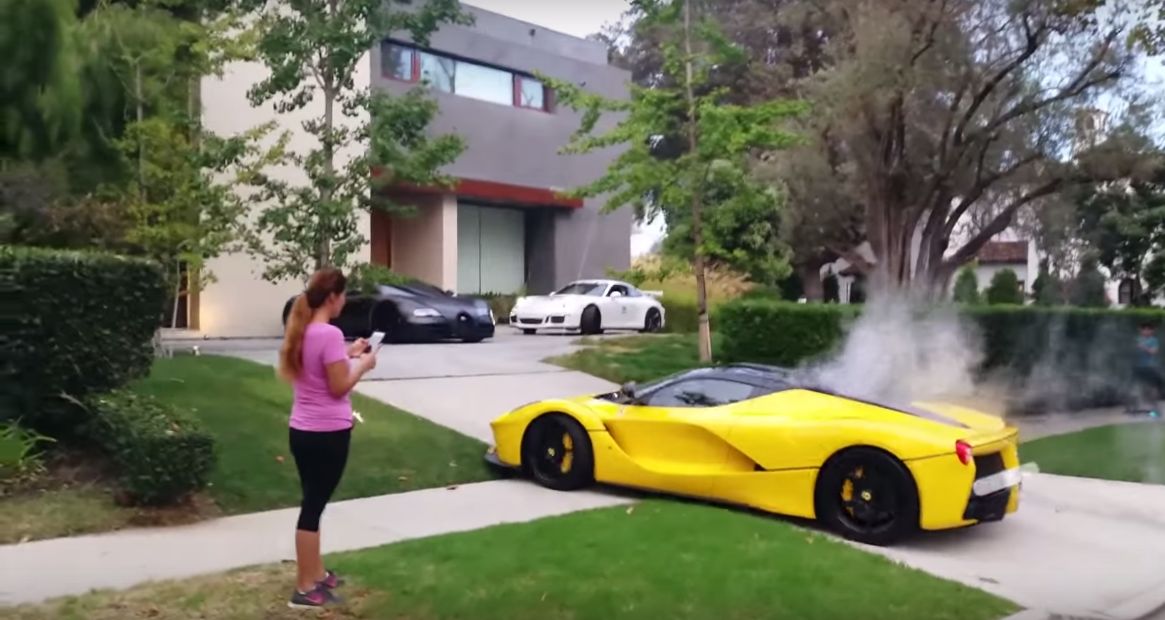 If you had “diplomatic immunity” what super car would you drift around your neighborhood? A couple of YouTube videos that have gona viral show a yellow LaFerrari and a Porsche ripping through the residential neighborhoods of Beverly Hills. As you can see there are spectators standing around filming the fly-bys. Perhaps the smoke coming from under the hood is karma.

The name of the car’s owner has not been released, but he is rumored to be part of the Qatari royal family, and indeed the yellow LaFerrari — that boasts 950 hybrid horsepower and a price tag of $1.5 million — is registered to Qatar.

Local police are now investigating the incident which occurred last Saturday evening, telling Jalopnik that “It’s in the hands of the State Department now,” and, “Honestly, we don’t even know who was driving the Ferrari. All this driving occurred outside the presence of the police.”

Police did state that they have positively identified the driver of the Porsche.

As for the “diplomatic immunity” claims, if the correct credentialing is present, that could be a legitimate boundary to prevent the State Department from prosecuting the driver(s). It is possible for the official’s home country to waive immunity in the most serious of cases — such as in 2002 when a Colombian diplomat was prosecuted in London for manslaughter — but cases like this are rare. However diplomats may be expelled from a country where pleas to waive immunity have been denied.

UPDATE: September 16, @1425 EST, a comment from another blog, however note the information is unconfirmed, although interesting:

Those cars belong to Sheikh Khalid Bin Hamad, a member of the Al Thani Royal Family. Kris Herzog here, My company The Bodyguard Group of Beverly Hills works on that street in the 700 block of Walden and we have called 911 on them a few times. The subjects in that video from Qatar have off duty police officer bodyguards to pretty much let them get away with anything. NOTE:
Diplomatic immunity does not cover violent crimes so if they committed a violent crime like reckless driving causing serious bodily injury they can in fact be arrested and prosecuted.
Kris Herzog, Owner, The Bodyguard Group of Beverly Hills

For the full story visit: https://www.yahoo.com/autos/laferrari-driver-caught-terrifying-beverly-hills-129157052077.html

Continue Reading
Advertisement
You may also like...
Related Topics:exotic cars