Lost in Transmission Rutledge Wood and friend George Flanigen are on a mission to save the most unique rides across the South. I have always been a big fan of Top Gear (U.S.), I personally enjoy the everyday vehicles that are introduced into the show as well as the highlights of the supercars and of course the comedy between the stars. Adding in the human factor I think always helps, showing people, “hey, these guys are human, they love cars just like we do!”

It is no secret that Rutledge Wood is a true car enthusiast, with a passion for the most unique rides around and not to mention his heavy involvement within the Motorsports industry.

Rutledge’s car collection is proof in itself that he is a true car guy; from a 1966 Volkswagen Double Cab Pickup, where he traded his 1970 Datsun Rat Rod Pickup, to a 1983 Honda Civic Wagon, 1996 Buick Roadmast Estate Wagon, 2011 Ford F-250 Super Duty on Kelderman Air Ride Suspension, and my favorite, a 1949 Chevrolet Step Van (Kurbmaster). It’s pretty clear Rut has quite a collection and covers most genres of vehicles. For more of Rutledge’s collection visit his personal website at: http://www.therutledgewood.com/garage/

I had the chance to check out the first episode of the series featuring a 1981 Delorean that was submerged in Hurricane Sandy. The episode “Drowned Delorean” premiered on May 07, 2015 – 10:03-11:01PM ET. What lured me in personally was not the Delorean build, but Rut’s 525HP 1949 Chevrolet Step Van (Kurbmaster). I think with most “car” shows, the folks at home want to see unique rides and to learn a little more about the characters on the show and justify why they are on a car show. “What gives ‘these guys’ the right to have their own show, what have they built or what do they own?” The Delorean is indeed an iconic automobile, but the Chevy Step Van made for a bad ass tow pig!

The dialogue between the characters was pretty cool, but I feel they need to show more of the restoration portion of the build. Don’t get me wrong, there are a ton of rebuild / restoration shows on TV, but I am talking more of an overview of what was done, maybe a time-lapse of some sort to show what was actually done. It doesn’t have to turn into another restoration show, but at least touch more on the build portion or include some of the interaction when finding the parts car, etc. I’m by far no expert car guy, I just love cars, all genres. They bring folks together and it is an opportunity to express our selves through the uniqueness of customizing them and adding in more of the wrench time I think will draw people in. 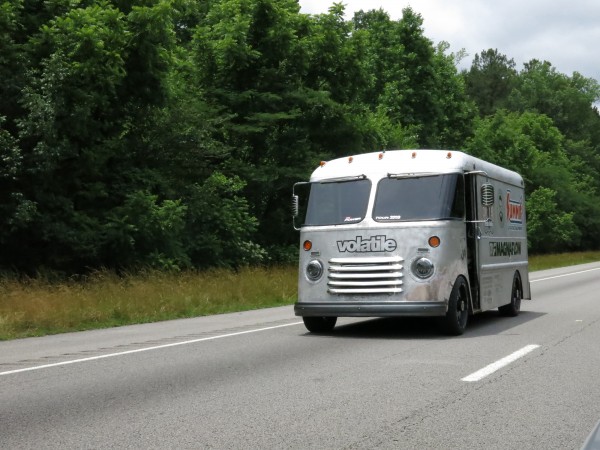 Overall I enjoyed the show, I think Lost in Transmission Rutledge and George will have success. I am a fan of Rutledge’s work and I definitely have this show scheduled on my DVR and I am looking forward to many more episodes. Visit http://www.history.com/shows/lost-in-transmission for more air times or tune in for NEW EPISODES THURSDAYS AT 10/9C