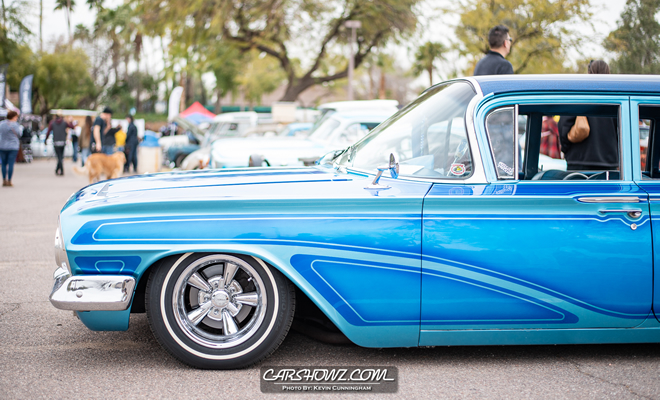 The story of how I ended up at this show (Lowlife Lineup #6) started at the Hot Wheels Legends Tour show I went to in September.  I spent some time looking at a VW Thing with a rust-like patina and a vibrant top.  I noticed a For Sale sign in the glove box and it stuck with me throughout the day because the patina wasn’t rust.  The Thing had been in a garage that burnt down around it and the patina was from the fire!  I wanted to know a little more about it and noticed that Doug’s Buggs was painted on the side.  After the show I hopped on Facebook to see if I could find out a little more information.  Sure enough, Doug’s Buggs and Bunnys is a local VW shop here in Mesa, Arizona.  I reached out with a copy of the photo I had taken of it earlier and asked if it was actually for sale.  Even though the owner was reluctant to part ways with the Thing, he confirmed it was for sale to finance other projects (citing a lack of “Leno $”) and after a short conversation invited me to Lowlife Lineup #6.  I immediately confirmed I’d be there and I’m glad I did!

The show was held on Saturday, February 9th at Big Surf Waterpark in Tempe, Arizona.  It was unusually overcast and relatively chilly but as I rolled in, I knew it was going to be good.  The entire north end of the parking lot was designated for the show and the south end was for spectator parking.  There were three vintage trucks waiting in line to pay for their spot in the show and all of them looked mint.  I got my equipment ready and walked right in.  Free shows are the BEST shows!  As always, I took a minute to orient myself and figure out a plan of attack for photos.  Up  one side of a row and down the other is usually efficient for me and allows me to snake my way through the show without missing anything.  I decided on that method and got to work.  Within two minutes I had already ruined my plan.  I was all over the place.  People were still rolling in and I wanted some candid shots of them driving or checking in so I kept hopping back to the entrance or the fence and then back to the parked vehicles.  I was a little bit of a mess for a good 45 minutes.

Eventually I got into a solid rhythm and worked through my flow, only stopping occasionally to speak with owners.  There are some incredible stories out there.  A gentleman with the Pacific-themed, vibrant red Karmman Ghia explained to me why he had decided on his specific audio setup, the fact that he had a mini surfboard that matched the glovebox cover, and that the glovebox cover was in fact airbrushed instead of actual wood.  I spoke with a young man who had a trail-ready Toyota Tacoma and learned that his dog was legitimately camera shy.  He had to pretend to take a photo of his dog via cell phone just to coax it into looking at me for the real photo.  I chatted with an elderly man about his recently purchased custom truck.  I learned that the previous owner had done most of the work but when he bought it, the current owner pulled the exhaust system and decided instead to run pipes down the side.  He explained that both upper and lower portions of the windshield were the original frames, still flipped up, but that he wanted to chop the top for better viewing.  I only mention all of these examples for two reasons.  I wanted to highlight just how welcoming this show was and also brag that I’m finally growing a spine and SPEAKING to people instead of just being a creepy lurker.

The show had such a variety of genres to the point that it really didn’t matter what type of enthusiast you were; there were vehicles present for you to enjoy.  Plenty of vintage cars, lowriders, trucks, 4x4s, and of course Volkswagens.  The sheer range of vehicle types and different styles meant that anyone who showed up had something to enjoy.  Personally, the variety kept me engaged and enthusiastic.   My favorite of the show was the blue 1959 Chevy El Camino.  I don’t know what made it happen, but when I was about 14 I fell in love with the El Camino and the first model year in particular.