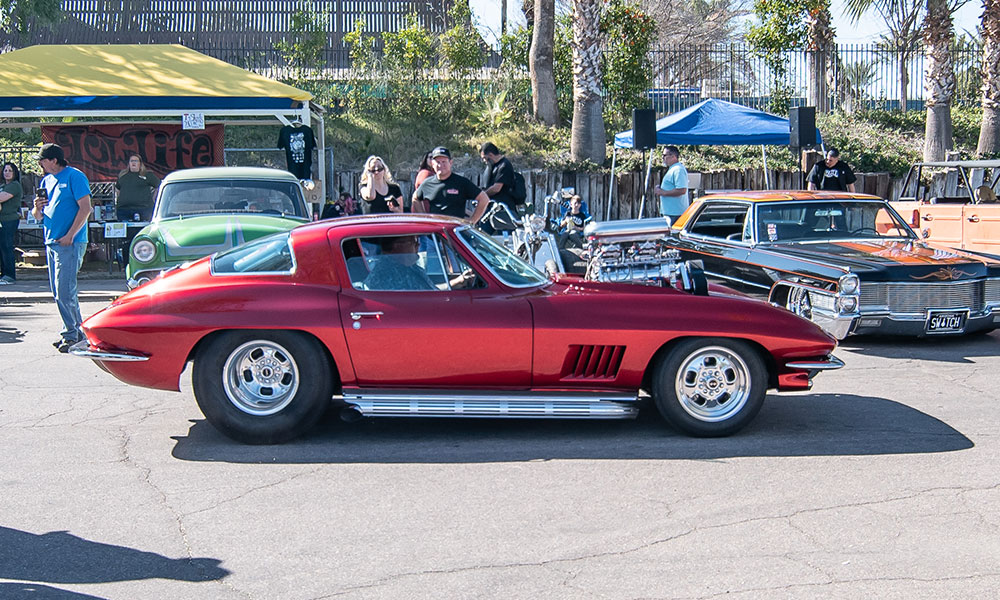 While most of the country is hunkered down this time of year, Arizona is starting to ramp up the number of car shows available to enthusiasts.  I can’t really say it’s the start of show season because the weather here is so amazing that it allows car shows to happen virtually year-round.  (Yes, I’m rubbing it in!)  On Saturday, February 8th Lowlife Arizona hosted Lowlife Lineup #7.  Last year’s show was one of the most enjoyable I’ve been able to shoot so I was excited to be going back.  There’s a vibe at Lineup that I think every show should aspire to have.  More on that later….

Lowlife Lineup #7 was held from 12-5pm at Big Surf AZ on a mostly sunny day that hit around 75 degrees.  A more perfect day for a car show could not be had.  This year seemed to bring out more vendors, more participants, and more spectators.  Everyone I encountered seemed to be glowing with positive energy and were more than willing to chat a little bit.  As was the case with the show last year, there were vehicles from virtually every genre.  Classics, lowriders, 4x4s, mini-trucks, and more were all parked side by side for a relaxed afternoon designed to be enjoyed by all.  I saw a couple stanced rides, an unbelievably tall truck, and even a super car.  The top-fuel dragsters that showed up gave us all a little peek at exactly how loud they were.  I also learned that the startup procedure for a dragster of that caliber takes a few minutes and a lot of coordination.  I spent about 20 minutes questioning the owner of a Manx-style buggy with a handmade wood roof.  It was extremely unique and it was evident that he was proud of his work (and for good reason).  I snapped a photo of two gentlemen beating the heat in the back of their sweet van.  I think the car that stood out to me the most was the Chrysler 300 with the lime green details.  It was an unexpected little surprise and it was very well done!  The El Chilero Chevy 3100 was STUNNING in person.  The Vespa 400 was also notable.  I don’t think I’ve ever seen a car that small.

The whole show was put on as a charity event in support of the Arizona Animal Welfare League and SPCA.  They were able to find forever homes for a couple dogs because of this show.  The sponsor list is extensive and renowned.  It includes Switch Suspension, Doug’s Buggs and Bunnys, Dino’s Chevy Only, Arizona High Test, c10_vatos, Grindertv, Big Surf AZ, Honey Bears Barbeque, Deschutes Brewery, Makieitpopwithchop, and Caveman Printing & Apparel.  The label “family-friendly” is a big part of Lowlife Lineup and it was very evident that they mean it.  I overheard fathers teaching their sons how to detail a car, I saw a mother breaking out lunch for her daughter, I saw picnic blankets spread out with lounging dogs and their families. There are many aspects of this show that I respect but that element is at the top of my list.  Making the show so obviously family friendly changes the whole feel of the show.  It seems less competitive and from my perspective, it puts people in a better mood.  I’ve been to many different types of car shows and the general attitude of Lowlife Lineup is one of the best I’ve ever experienced.  There’s no snobbishness, no mean-mugging, people seem genuinely happy to talk to you, and while there are clubs that show up they don’t just stand around in their “cliques”.  I’ve seen varying degrees of these aspects at different shows and it’s disheartening when I notice it.  This show is different.  It’s warm, it’s unique, and the rides are a breath of fresh air.

I do have one teeny, tiny, little critique of the show.  I wish the cars had more space.  Some of them were so close that a kid couldn’t even slide between them.  That’s not a problem exclusive to Lowlife Lineup but it presents a lot of challenges to a photographer.  I want to take amazing shots of each vehicle in attendance but more often than not, I had to take advantage of whatever angle I could get.  It’s tough to thoroughly appreciate someone’s pride and joy when its neighbor is jammed right up next to it.

Anyways, enjoy the photos!  I had a great time at the show and I hope if you’re in the area next year around this time that you come check it out.  It’s worth it!

For more car show coverage of other events, check out our coverage gallery, here.