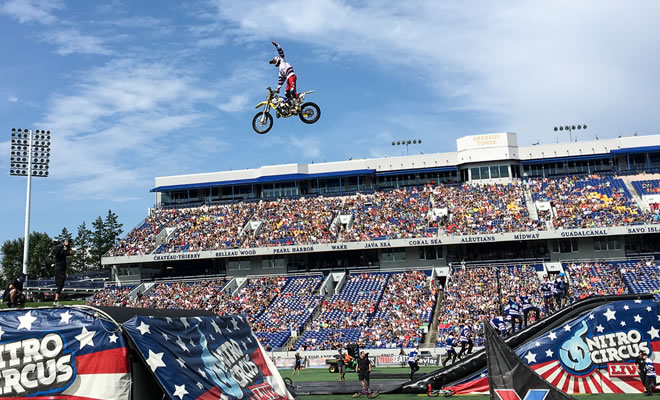 We are huge fans of Travis Pastrana and the Nitro Circus. Since 2009 we have watched the action sports show since the first time it debuted on MTV, but never had an opportunity to check it out in person. In 2015, Mark Pantalone gave us a teaser with some cool action shots from the Philly Show. Ever since then, I knew I wanted to see it in person. Nitro Circus Live Annapolis is a show we didn’t expect to see pop-up on the tour schedule. While checking out the tour schedule via nitrocircus.com, we immediately signed up to be notified when tickets were on sale. While all of the other show tour dates were becoming active (able to purchase tickets) the Nitro Circus Live Annapolis was delayed for release.

Trying to figure out what was going on with ticket sales, we quickly learned that the show has received some kick-back by the local community. Not knowing what the Nitro Circus Tour is all about, with the misconception that the event is a, “noisy biker gang” coming to the Navy–Marine Corps Memorial Stadium the local community pushed back immediately.

The board of directors for the Admiral Heights Improvement Association voted unanimously to recommend the event not be permitted at the stadium. In a letter to Mayor Mike Pantelides and Alderman Fred Paone, the board outlined its belief that Nitro Circus Live is not appropriate for a venue with residential neighborhoods on three sides.”We are firmly set in our objections to this event in order to prevent what has already been prohibited — inappropriate events in a residential community,” the letter stated. (source: capital Gazette)

Growing up in Maryland, Travis Pastrana’s, The Action Sports Legend, along with Tommy Passemante AKA “Street Bike Tommy” has always dreamed of performing in front of their hometown crowd and they were not going to give up until that happened. The stadium hosts Navy Football games where canons are shot, Blue Angel Flybys are not uncommon and a stadium that hosts 34,000 in capacity; surely a few dirt bikes will not hurt the town.

Nitro Circus Live Annapolis was going to happen and Travis and Crew worked heard to make it happen. Check out this video showing the partnership between Travis, the Annapolis Mayor and some words from family and friends:

We arrived at the stadium at 1230, an opportunity to get in early and watch the crew practice, listen to a brief question and answer session and hopefully grab a couple of free t-shirts they were throwing into the crowd.

If you are not familiar with Nitro Circus Live, it is a kid-friendly stunt show that focuses on FMX, BMX, Skateboard, Inline, Scooter and Contraptions stunting through-out the show. The stunts are amazingly performed and the contraptions are straight-up entertaining, take a look for yourself:

Both of my Daughters, our oldest is 12 and youngest 10 and Wife enjoyed the show very much. The entire purpose of this blog post is to inform those who are not familiar with the Nitro Circus and if you have the opportunity to check them out, you should!

Visit: http://nitrocircus.com to find a show near you. Not only are these athletes very talented, they are also very active in supporting our military as well and giving back to the community.

A few quick clip from my cell phone…