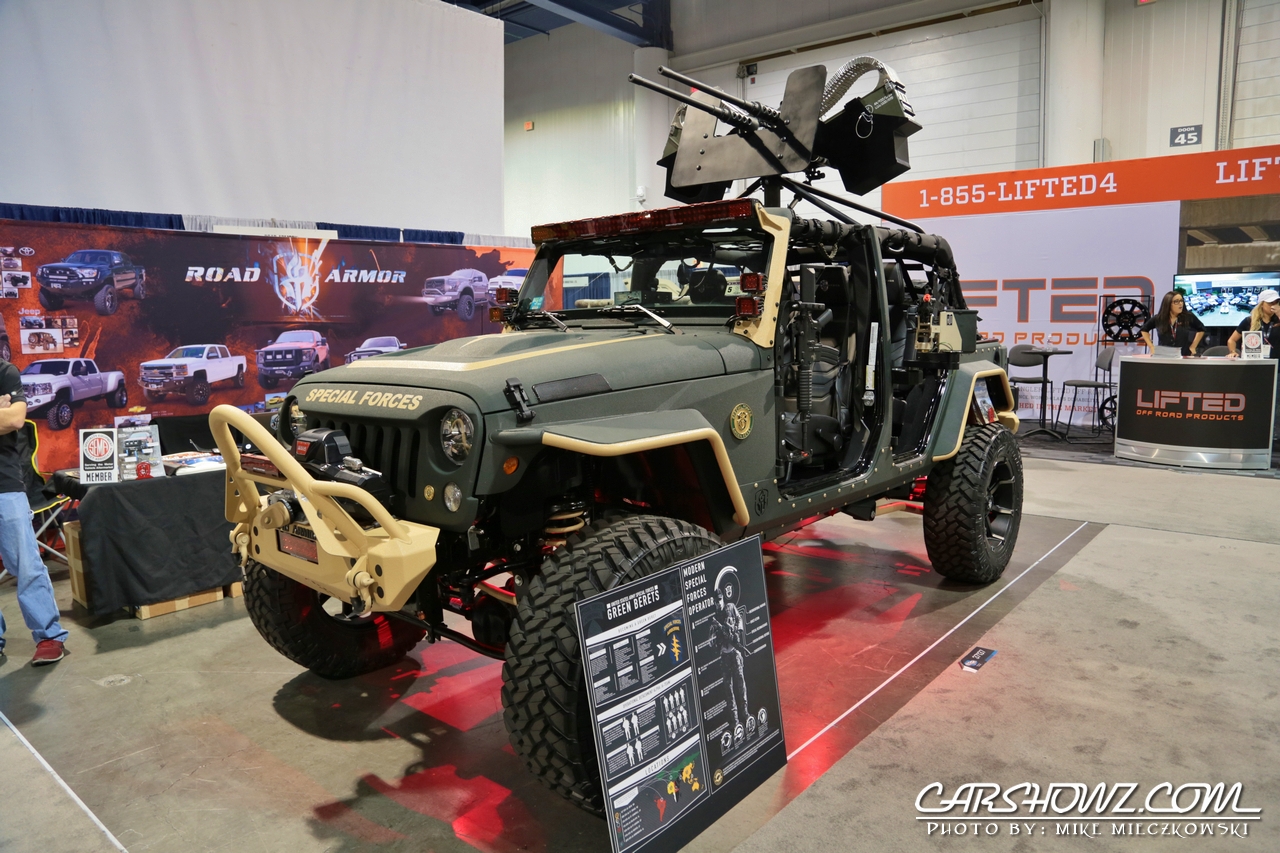 Road Armor Bumpers teamed up with the Green Beret Foundation to build a special JK series Jeep Wrangler for SEMA 2014. It is a great platform to show off Road Armors newest tech and support a great cause at the same time. During SEMA the guns in the side mounts were not real and the twin 50mm guns up top were not loaded, but that was set to change after the show was over. While talking with Road Armor I was told 50mm guns would be live for some desert shooting. This JK was by far one of the coolest at SEMA, not just because of the Special Forces theme, but also the cool new accessories from Road Armor. After a road trip to shows the Jeep will be handed over to the Green Barret Foundation for a year to promote their cause. 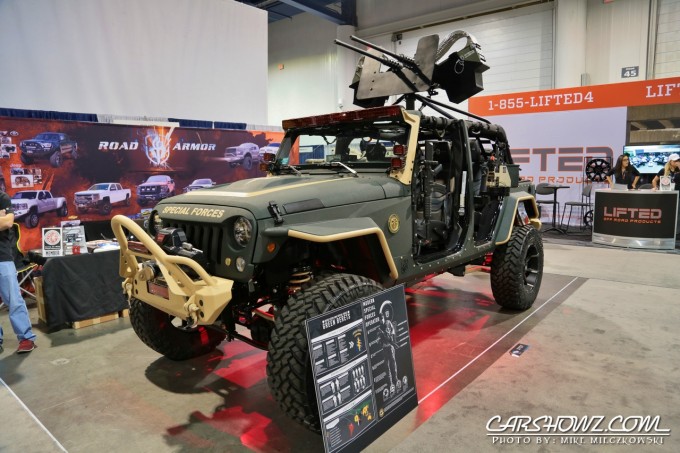 Travis Kirkman of Road armor was nice enough to show me the custom built parts that will soon be available to the public. He also said this Jeep was a way of showing off parts they are re-releasing for the JK series. The fully functional and completely redesigned heavy duty Road Armor bumpers front and rear make a huge visual impact right off the bat. The front bumper with the stinger winch and lighting is just as eye catching as the 50mm guns. 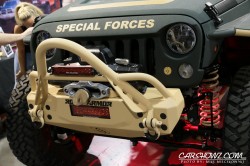 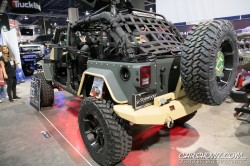 Body armor for the JK has also been upgraded. One of the nice things about these upgrades is they use much of the factory mounting locations and looks like a factory part. Road Armor extend their rock guards under the door location all the way down to the body seam. Travis states they are the fastest and easiest to to install out of any being produced at this time. Front and rear fenders provide extra protection with the added feature of looking great. 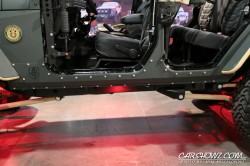 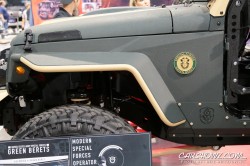 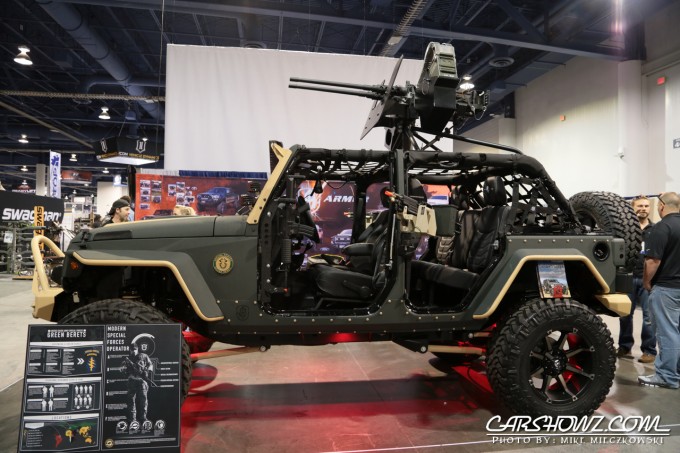 Other features on this killer JK that were designed by Road Armor were the LED light mounts that are designed to keep the light beams aimed where intended while also being heavy duty. 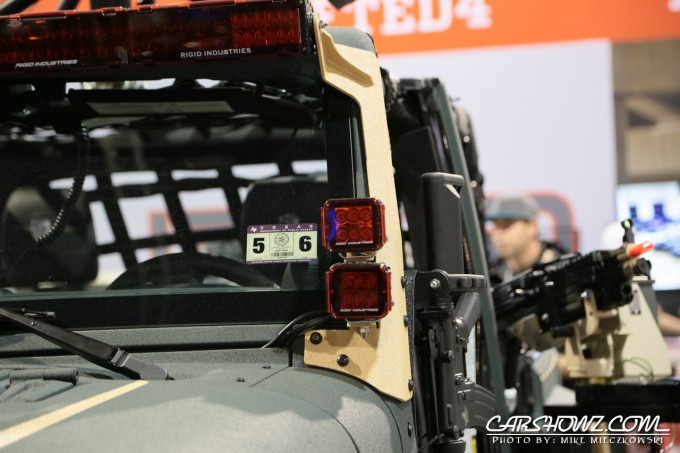 For more information about Road Armor and the Green Beret Foundation check out the following links:
http://www.roadarmor.com/
http://www.greenberetfoundation.org/ 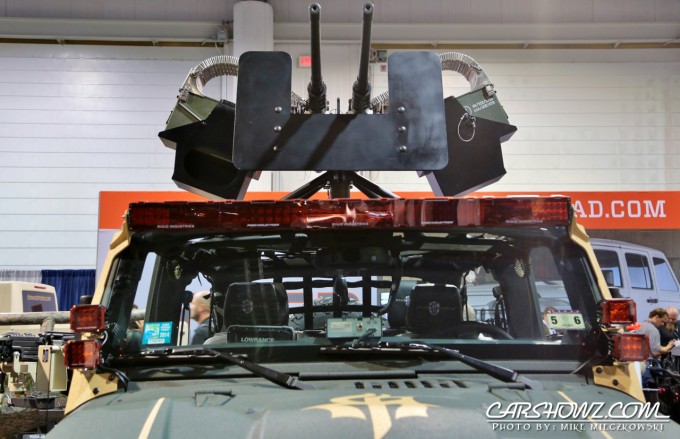 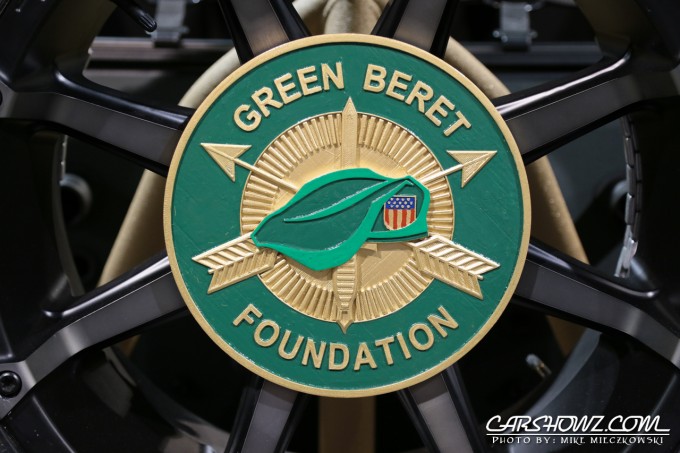 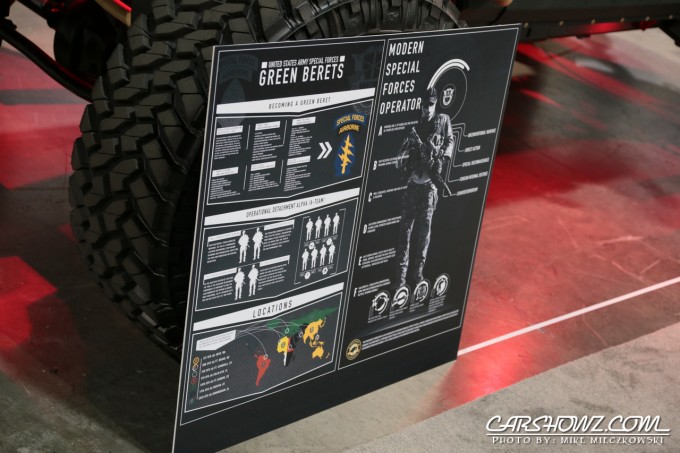 For the rest of the SEMA Show 2014 photo coverage check out https://www.carshowz.com/photos/index.php/2014-Car-Show-Photos