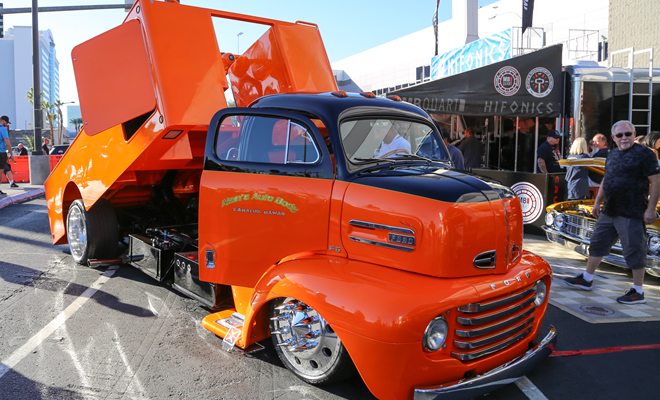 If inside of the Las Vegas Convention Center was not enough, check out the SEMA 2017 outdoor photos put together by our CarShowz Team. To continue on with our SEMA coverage series, we wanted to drop our outdoor coverage album today on Thanksgiving. While the family is arguing, the kids are running around acting crazy, Thanksgiving Day parade is blaring on the TV or later on the Cowboys are losing, you can sit quietly in the corner of the room and check out our pics 🙂

The outdoor layout of SEMA was equally impressive, all of the surrounding lots were filled with awesome rides, vendors, vehicle demonstrations on the skid pad and more. Everything from hot rods, stadium trucks, lifted trucks, lowered rides, you name it, it was there. I warned the newbies of SEMA that in the 4 days we were there we will not have time to see everything. Even while doubling back through the convention center and parking lots thinking we have covered every square inch, I mentioned that there will be vehicles during the SEMA Rollout Parade that you will not notice. You will ask the question, “where was that, I didn’t see it?!”

As a team, we did our best to cover the event for those who were not able to make it out or for those who did not have the time to make there way through the halls like we did. This is the second series of our coverage, stay tuned, because we definitely have a ton of coverage to be released; for example: Vehicle Features, Model Features, SEMA Models, SEMA Ignited and more.

To check out our previously released coverage visit: SEMA 2017 Photos

If you are still on dial-up internet (*smile) and the photos are loading slow, you can visit our galleries directly on Flickr.