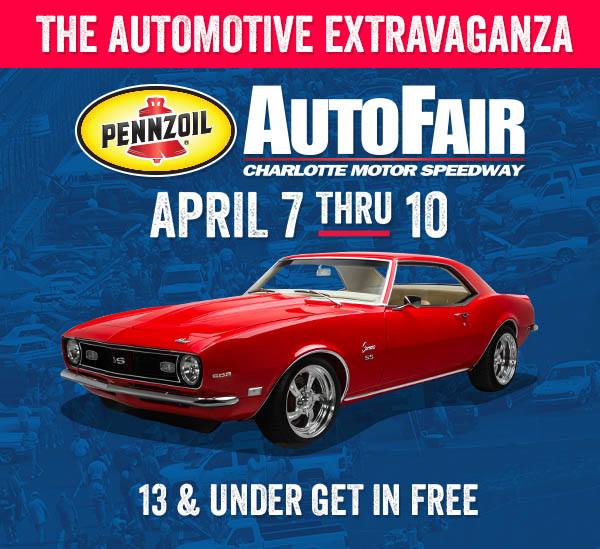 Keeping tabs on local events is the best way to see classics and other great cars from time to time. If it’s a true passion of yours though, it can also be a good idea to look ahead and schedule trips to some of the really great shows.

For those of you on the East Coast, these are some regular ones that stand out.

Also known as the Pennzoil AutoFair, this annual showcase takes place at the Charlotte Motor Speedway – one of the most famous racing venues in all of the United States. That should give you an idea of the size and scope of the show, which involves, as one write-up phrased it, four days of family-friendly fun and eye-catching examples of automotive excellence. Best of Show consideration at the most recent Charlotte Autofair included a range from a 1929 Ford Model A to the stunning lime green 1970 Plymouth Barracuda that took home the honor. As for your time in Charlotte, the auto fair will be the main attraction, but it’s worth noting that you’re just a short drive from the exceptional beaches of the Carolina coasts. And, if it’s in season, you can see a professional sports team like the Charlotte Hornets or Carolina Panthers in some of your downtime!

The Hilton Head Concours d’Elegance & Motoring Festival takes place in the fall, and is certainly among the premiere events in this regard in the country. Its own website describes it as “10 days, 2 islands, 1 passion,” which more or less sums up the excitement of it all. This is not your average classic car show exhibiting old classics spread out in a lot (though you will certainly have a chance to observe some incredible classic cars up close). It also consists of live racing and various other entertainment. And it just about goes without saying that the Hilton Head area is a beautiful coastal destination, even during the fall. The old, historic town of Savannah, Georgia also makes for a nice side trip.

This is one to consider in part because Atlantic City is once again on the up as a tourist destination. Once a Las Vegas imitation, then a virtual ghost town, the city is experiencing a slow but steady rebirth in part because of a boom in activity for online casinos. These are pumping revenue into the city, allowing it to show its stuff as a tourist destination once more. As you can imagine that means there’s plenty for you to enjoy while in town, from beaches to the famous boardwalk to the casinos themselves. The show, meanwhile – Classic in Atlantic City – is an annual February event that’s essentially part showcase part auction. As many as 400 cars might sell over a three-day span, which should give you an idea of the volume of activity and the number of classics on display.

This is known as one of the best “Concours d’Elegance” exhibitions in the country, and takes place on Amelia Island in Florida. It’s been going on since the mid-1990s as a charitable event, and it’s developed a reputation for celebrity properties and incredibly cool classics. Looking just at some of the highlights from 2018, you can see everything from a 1929 Dusenberg to a 1908 Silver Ghost. Perhaps more than any other show listed here, Amelia Concours d’Elegance is almost like a pop-up auto museum.

This is another Florida event, in Palm Beach specifically. A popular vacation destination in and of itself, Palm Beach is basically at the northern end of a string of attractive beach cities and areas, including West Palm Beach, Lake Worth, Delray Beach, and then Fort Lauderdale and Miami going farther south. Palm Beach is a little more laid back than the rest though, making it a great place to relax on either end of an event like the Cavallino Classic. The show, as you may guess if you’re familiar with Cavallino Magazine, is effectively a celebration of all things Ferrari, held each January (when the beaches are still appealing).

Continue Reading
Advertisement
You may also like...
Related Topics: