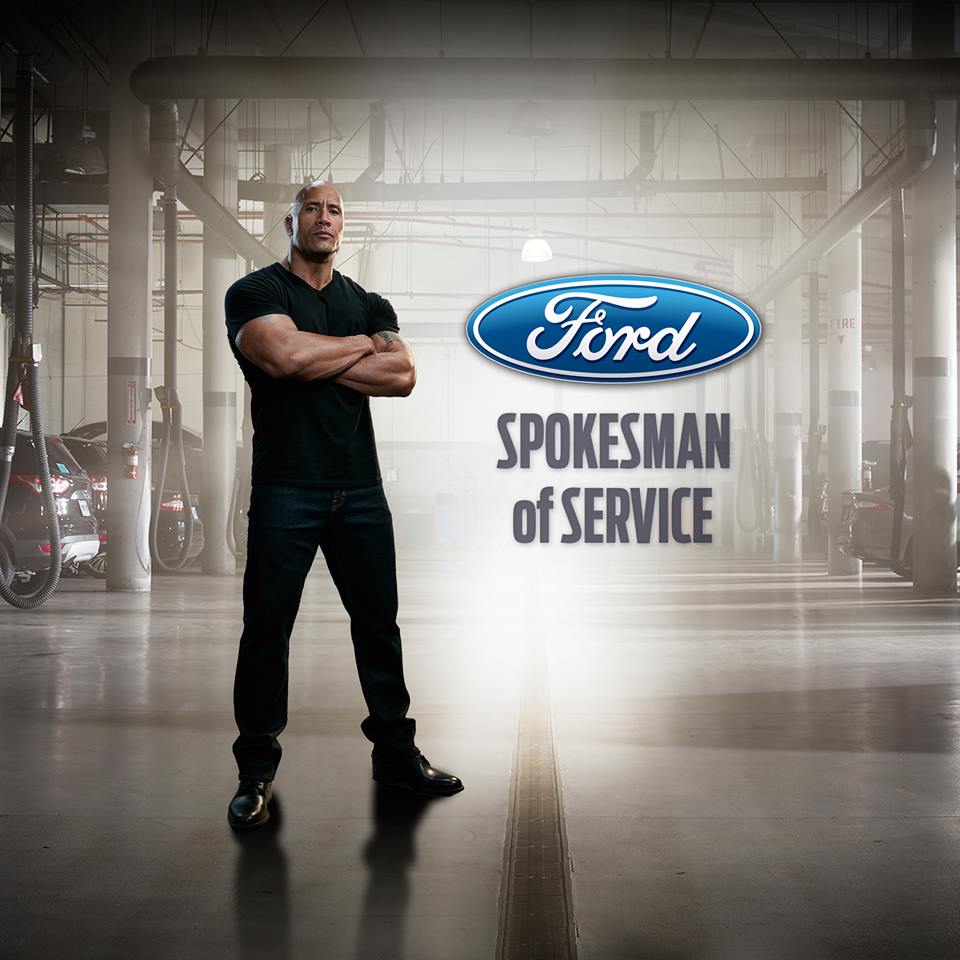 The Rock and Ford Service have partnered to launch a media campaign starting October 12, 2015. Stay tuned and look for Dwayne Johnson and The Specialists on TV, on digital channels, social networks, radio as well as point-of-sale inside Ford Dealerships. With Dwayne’s relentless drive to achieve greatness and the Ford Service commitment to excellence, it’s a perfect fit. In fact, it’s not a stretch for Dwayne to know the ins and outs of Ford vehicles. He’s been a long-time Ford owner. Currently, he owns three Ford vehicles, including his favorite, the F-150.

via @therock Instagram: therockBIG NEWS: Excited to be in partnership with FORD as their official #SpokesmanOfService. My relationship with FORD began when I was 15yrs old and bought a classic blue ’77 Thunderbird as my first car for $40 bucks (true story). I didn’t even have money to put gas in it, but it was all mine and I’ve been a FORD man ever since. Representing their Service Department and the hard working FORD individuals committed to taking care of their customers echoes one of my core enterprise beliefs, “Always take care of the audience” and whether it’s in a movie theater or behind the wheel, taking care of the people is what matters most. #BigPartnership #SpokesmanOfService #WeGetTheJobDone #AndGodBlessBlueThunderbirdsFor40Bucks

Dwayne Johnson has a huge following and he is well-liked by people from all walks of life. This partnership could be pretty big for both Ford and The Rock.

Dwayne Johnson Take Command of The Specialists at Ford

“The Specialists at Ford” are an elite crew of Ford technicians led by Johnson. This dedicated team has all of the training, diagnostic tools and Motorcraft parts that make servicing your vehicle at your local Ford dealership the right decision.

In addition to Johnson’s on-screen presence and producing success, he is a longtime Ford fan, owning three Ford vehicles – his favorite being F-150. His genuine appreciation of the brand makes the alignment of Ford service and Dwayne Johnson a great partnership.

Television ads will begin running Monday, Oct. 12, followed by radio, digital and social spots. The multiyear deal will feature a continuous stream of new content being developed – with Dwayne Johnson and “The Specialists” keeping the campaign fresh and exciting.