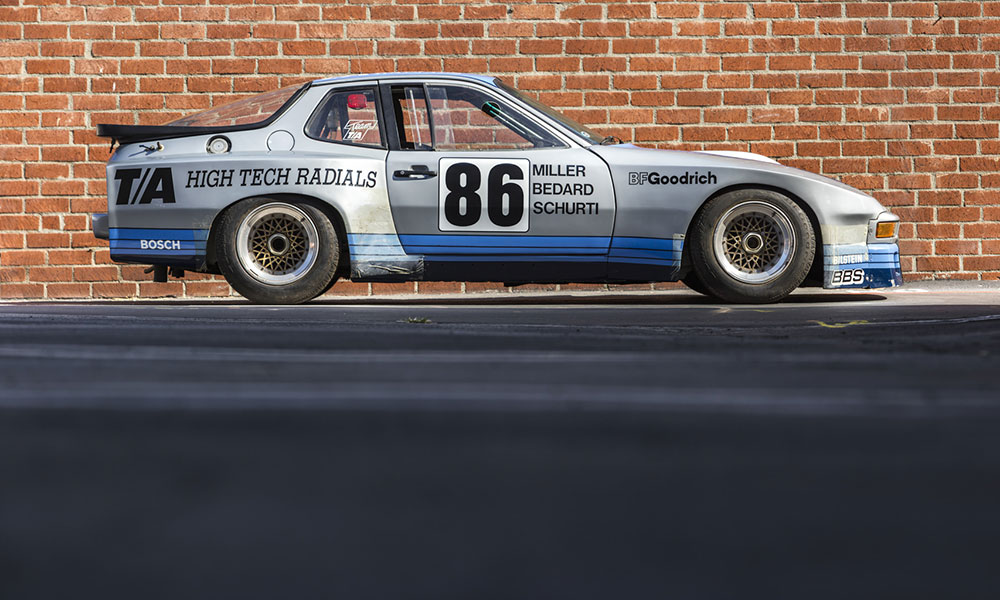 As Stratas Auctions continues to offer a diverse selection of luxury vehicles with storied histories, the newest vehicle to hit the new digital auction platform is a 1981 Porsche 924 GTR with Le Mans racing pedigree.

A car designed and built for Le Mans, the GTR was one of Porsche’s most highly refined racing machines. The GTR offered here, chassis BS720008, is the 8th example of the believed 19 total chassis, and one of the three chassis to submit to Le Mans 1982. A gearbox failure after 128 laps, lead to a DNF, however its sibling transaxle car, number 87, would go on to win the IMSA GTO class at Le Mans.

Chassis BS720008’s season began in January of 1982 at the 24 Hours of Daytona. The vehicle, raced by Paul Miller, Pat Bedard and Jürgen Barth, placed 4th in GTO class, 11th overall. BS720008 continued its motorsport career post Le Mans. At the Trans-Am Trois Rivières, driven by Paul Miller, it would finish the race with a bronze metal. The following year 1983, chassis BS720008 would take part in a host of events, until it made its final appearance in period at the Budweiser Speed Week in September of 1985.

It is said that BS720008 exchanged hands in 1988, purchased by a collector of Porsche racing cars. The GTR’s days of wheel to wheel racing were replaced with regular on-track exhibition events throughout the 1990’s and early 2000’s. The car would remain under single private ownership for 32 years until trading hands to a close friend of the long term owner early in 2020.

As it is offered now, this 924 GTR wears its 1982 Le Mans BF Goodrich livery which was reinstated sometime between 1985 when the car last ran competitively and 1988. Chassis BS720008, although without the accolades of its siblings, still holds real motorsport heritage. It remains 1 of only 7 GTRs to have taken part at Le Mans. Perhaps thanks to its history, much of chassis BS720008’s integrity has been left intact. It is believed that the drivetrain and driveline are original as are much of the unique Weissach components.

Today, the car wears the BF Goodrich livery it ran with at Le Mans in 1982. It’s unclear exactly when the livery was updated from the Trans Am livery it finished its career with, but known history would indicate this was done between 1985 and 1988.

This GTR also appears to not have lost any of its original equipment. Both the instrument cluster and Momo steering wheel appear to be to spec, as do the door panels. Further indication that the car remains largely original to how it was last raced, the interior remains in preserved condition. The roll cage appears to be original, and even features a hand stamped identification number: G07 759.

The motor, gearbox and all other various driveline components are said to be original to the car as it completed its racing career. The seller states that the car has not been started and ran since the early 2000’s but that the engine turns over freely with no visible updates being made to the car’s running gear or engine management systems.

This Porsche 924 GTR is currently available for viewing at The Motoring Club in Marina Del Rey, CA. Interested parties can learn more about this 1981 Porsche 924 GTR by visiting Stratas Auctions or calling 310-749-0174.