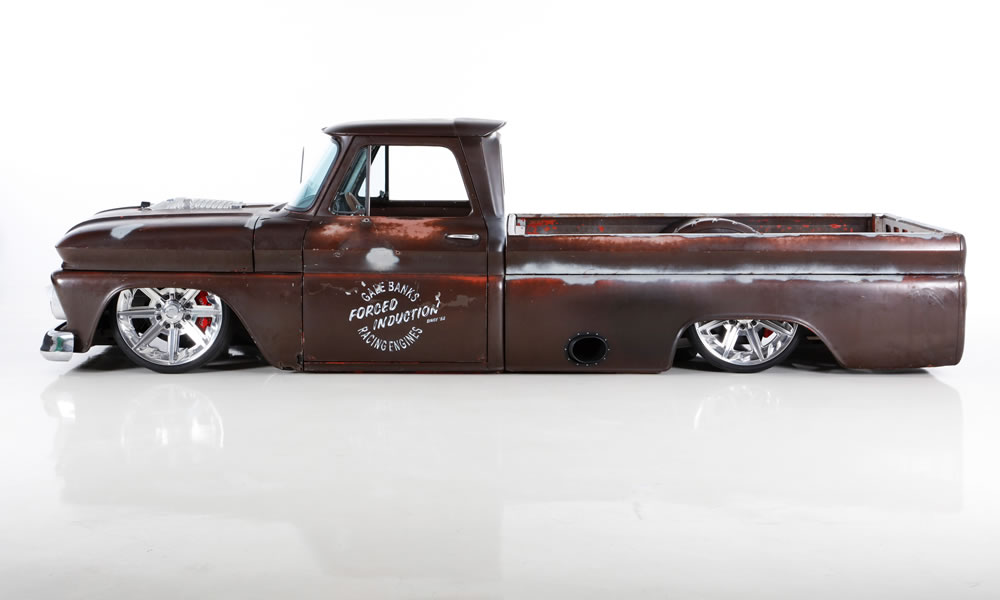 Banks Power 1966 CHEVY LOKJAW PICK-UP – As the exclusive worldwide distributor of the GM Duramax engine, Banks is showcasing its upcoming high-performance turnkey diesel engine program by unveiling a one-of-a-kind resto-mod named LokJaw. Named LokJaw for its ability to inflict tetanus, the truck was purchased from a fan for $1. At the heart of the rusty ‘66 Chevy ¾-ton pick-up truck is a Banks supercharged R866SC Duramax diesel engine that represents thousands of hours in engineering, design, and development. In addition to the R866SC engine, Banks outfitted the ‘66 Chevy pick-up with the best in modern upgrades throughout to make the ultimate high-performance street truck.

To provide instant throttle response, Banks chose to stray from the typical turbo setup and adapted a Whipple Gen 5 3.8L twin-screw supercharger and liquid-coupled intercooler to force air into the 6.6L Duramax engine. For even higher performance, Banks prepped LokJaw’s new powerplant for nitrous injection with the help of racing legend and NOS founder, Mike Thermos at Nitrous Supply.

LokJaw features a fortified Allison 1000 6-speed transmission built by ATS Diesel. The new Banks engine is controlled by the MoTeC M142 ECM with gear shifts handled by Powertrain Control Solutions paddle shifters. LokJaw sits on a Roadster Shop Spec series chassis that has been adapted to support the heavy-duty engine and withstand far more torque than typical LS-swapped pickups of the same era.

Banks was empathic about keeping the ¾-ton longbed pickup an 8-lug. This resulted in Roadster Shop creating their first air-bagged 8-lug chassis. With increased power and speed, comes better braking. Wilwood’s TX6R Big Brake Truck Kit, with its massive 15” rotors and 6-piston calipers can be found at both the front and rear. The supercharged truck wears Nitto Invo Street tires and NT555RII drag radials with one-off billet aluminum wheels designed by Sparc Industries. Shark-like fins around the circumference of the wheels extract hot air from the engine bay.

With the amount of performance available in LokJaw, data acquisition plays another extremely important role in the pick-up’s engineering. The 1966 Chevy features four Banks iDash DataMonster digital gauges. To make sure LokJaw is running at its optimized level, the iDashes display 2-8 parameters on each of its 5 customizable screens including, pressures, and temps, as well as dozens of calculated parameters, many patented like Manifold Air Density. Incredibly, each Banks iDash monitors up to 100 parameters with unparalleled data logging for real-time tracking of every important performance-related metric.

Banks has three turnkey engine configurations currently in development including a twin-turbo and super-turbo, with the supercharged variant being the first planned consumer release in 2022. Like Banks D866T engines, which power the U.S. Army’s fleet of Joint Light Tactical Vehicles, Banks parts are integrated into new engines on the production line at the Moraine, Ohio DMAX engine assembly plant. Final assembly and test is performed at Banks’ Azusa, CA engine plant.

It may surprise fans to learn that LokJaw is not entirely a one-off custom, in fact, almost all parts used to make the 1966 Chevy resto-mod are available for purchase and can be used for Chevy builds from 1965 – 1967. The estimated price for the Banks LokJaw Chevy is $350,000. While official pricing and power figures have not yet been announced for the new Banks Duramax engines, pricing is estimated to start under $40,000.

For more information on the Banks R866SC Supercharged Duramax 6.6L engine, visit bankspower.com/engines. iDash gauges and all available Banks products can be found at bankspower.com.

For more CarShowz.com features, check out our blog section, here.

Continue Reading
Advertisement
You may also like...
Related Topics:feature, trucks