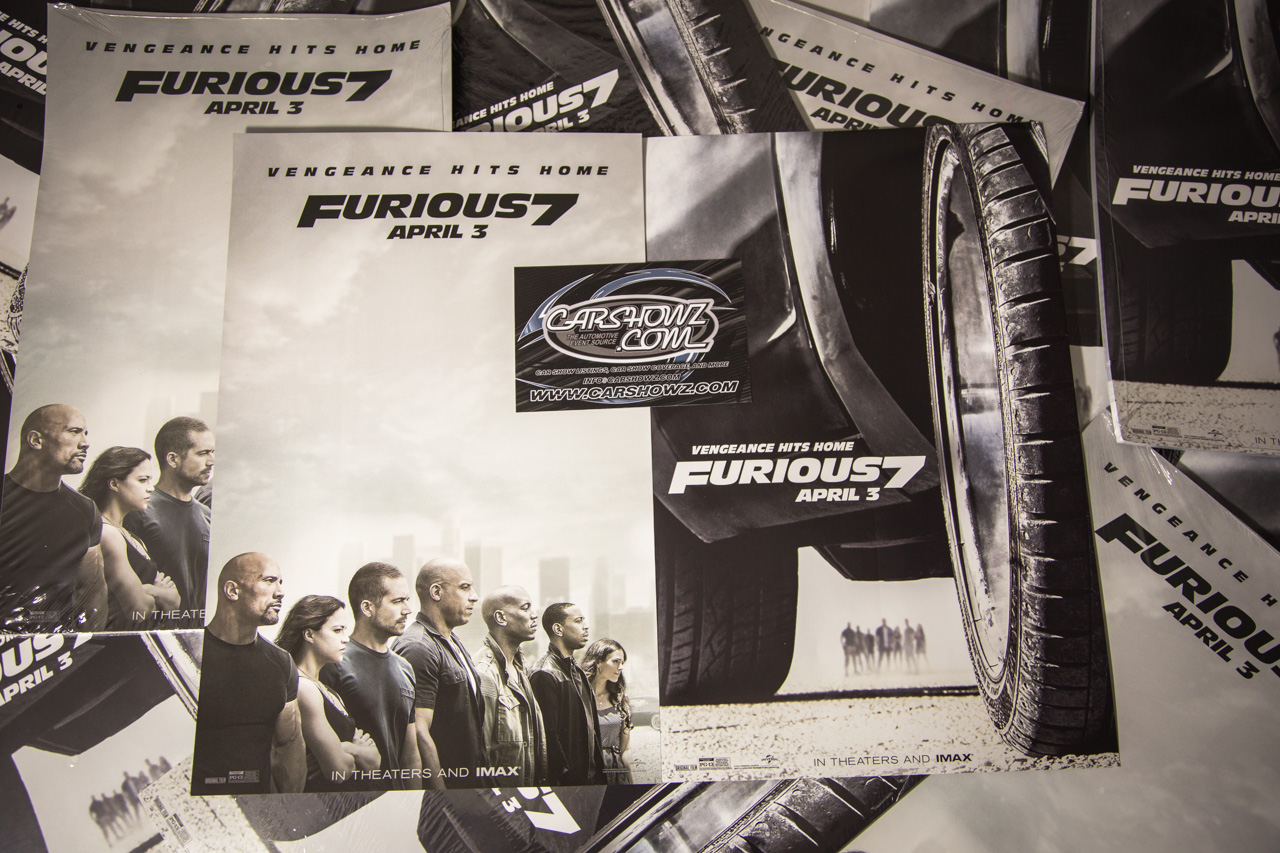 With much anticipation Furious 7 is hitting theaters the week of April 1st, 2015. The CarShowz Crew had an opportunity to attend an advanced screening of the movie compliments of Universal Pictures and Allied; we thank you very much for the opportunity and allowing us to be apart of such an iconic movie within the automotive industry.

With the tragedy that struck on November 30th, 2013, Paul Walker fans and everyone around the automotive industry were devastated to hear about Walker’s accident and him passing away. Universal Pictures had halted the filming of Furious 7 to allow for the cast and family to mourn the loss of Paul Walker and to regroup and come together as a family during this time. As many across the world have tried to find a healing power, it made sense for the movie to continue, to continue in honor of Paul Walker and his legacy.

With VIP seating and a total of 16 of us in attendance we were all able to soak in all of the hard work and we appreciate everything Universal and the Cast has put into this movie.

Before the movie kicked off a representative from Universal asked a trivia question, for an opportunity to win a Forza Horizon 2 game for XBox. Here is the question:

By story line, can you list each of the Fast and Furious movies in chronological order? Find the answer at the end of this article.

Below are some notes from the attendees.

Please note we will not give anything away from the movie in our review.

Jeff Cantagallo, CarShowz.com: Going into 7th release of a series, Furious 7, you go into the theater with a magnifying glass, looking at every aspect to see if and how the movie will fit into the rest of the other Fast and Furious movies. How in the world can you take a movie with seven installments and one-up the previous releases?

I honestly feel Universal hit the nail on the head, the entire movie was action packed, filled with cool cars covering all genres of the automotive industry and Universal was able to tie-in all of the previous movies.

Although I do miss the traditional car show, track appearances / tuning the cars feel, I understand the movie needs to also appeal to all audiences; which is one thing I feel Universal has done as the Fast and Furious series aged. Getting away from the traditional “tuner culture” and making the movie more into an action packed flick. As the series progressed, I feel they have met that balance very well.

Comments were made throughout the movie (from everyone) sitting around me, especially when Furious 7 hit the mid-point, if it was Paul Walker on the screen or if it was Caleb or Cody Walker, Paul’s brothers. Regardless of who the stand-in was, the segments throughout were seamless.  It is hard to determine exactly which sections of the movie were filmed before Paul’s accident and honestly it does not matter, because throughout the movie you can feel the energy of Paul Walkers presence on the screen and that’s what matters.

The tribute to Paul Walker in this movie was spot on and I felt Vin Diesel was given some closure as well. Well done Universal, well done!

April 3rd, you have to go see this movie on the big screen!

Brian L., CarShowz.com: Phew. Try holding back some tears for that.  Paul Walker, I’m going to miss seeing you on the big screen.  I’ve spent my entire automotive life watching you driving fast cars.  It’s hard to see that end. And how am I supposed to root against the Transporter?  Jason Statham is a beast.

I loved watching Furious 7 tie all of the previous movies together.  It was great seeing some of the familiar faces over the years make appearances. It’s definitely time for me to go and watch them all again.

Great movie all around, even overlooking the Person of Interest feel, and Avengers city wide destruction.  The cars were amazing, though painful to watch being destroyed, the film locations, the music, and we’ll say ‘other visuals’ were spot on.  While I miss some of the car show and track feel from the early movies, the never ending action and driving scenes were fantastic.

John Schill, Absolute Pro-formance: Being a longtime enthusiast and knowing how times have changed made this movie the most anticipated yet for me. The action scenes were on point, lots of great one liners that made you laugh and story plot that tied everything together was what made this movie their far best yet!

It was nice to see they touched back on the roots of the original movie in the beginning of the movie. Bringing in new faces only helped enhance the story lines and boost action scenes once again. Seeing how they have changed their lives through all the different movies and became a family is really heartfelt in this one last ride.

Rich Maxwell, 13-Three Motorsports: Personally I thought that some of the stunts, while cool and exciting, were a bit outlandish and not really believable. The story of it was one of the better ones. It’s more of an overall story, not just about a “job”. The ending was pretty intense, I guess knowing that it wasn’t actually Paul and the real life story behind it. The symbolism that they used was so fitting. Overall I’d say it was one of the best in the series.

Mike Mieczkowski, CarShowz.com: It was nice to see the franchise grow over the years from outlandish and somewhat unrealistic car scene movies (think 18 speed gear boxes) to a full blown action flick that still had awesome cars. While many of the stunts were not realistic, I felt they played nicely into the action flick concept. They did a nice job tying together the previous movies in to Furious 7 without the situations feeling out of place. As for the characters in the movie, they all played their part perfectly and I personally liked seeing Jason Statham added to the mix.

I have to admit I was skeptical at first as to how they could finish the film without a key character. I must say they did a really good job and there were not many points where you would say Brian O’Conner was obviously not Paul Walker. There were a few points in the movie that were meant to show the human side of Brian O’Conner and to draw emotion from the audience. I liked the way they pulled it off. The ending of the movie was also a very nicely done tribute to the man.

Kevin Cunningham, SeaHamm Photography: One sentence review: Furious 7 was fast paced, action packed, and surprisingly funny!
Long review: A fifteen year old boy spent a Summer night in 2001 at an upstate New York drive-in watching a film that would change his view of the world. That film opened his eyes to a flourishig culture of automotive enthusiasts and the idea that a car can truly be a beautiful thing. That boy was me and the film was The Fast and the Furious. That being said, one of the things I loved the most about Furious 7 were the nods toward the original film.

I was truly surprised by how much comedy they fit in. It really added to the film and the feeling of the characters being family. The film was essentially 2 hours of gnarly action scenes with shorter, slower storyline scenes scattered throughout that made up the other 17 minutes. There were a lot of big name celebrity cameos also. In my opinion it was probably the best installment of the franchise after the original.

A couple personal issues I have. The first is the unfortunately low number of “tuner cars”. I feel like the franchise was borne from the subculture of tuned sport compact cars and their builders but, has now branched out to focus on classic muscle cars and expensive exotics. The second gripe I have has to do with the cinematography. There were a handful of scenes that were dizzying. I have a small issue with motion sickness so you’ll have to take that gripe with a grain of salt.

Here is the answer to the above trivia question:

By story line, can you list each of the Fast and Furious movies in chronological order?

By billboard.com here is the music track listing from Furious 7: