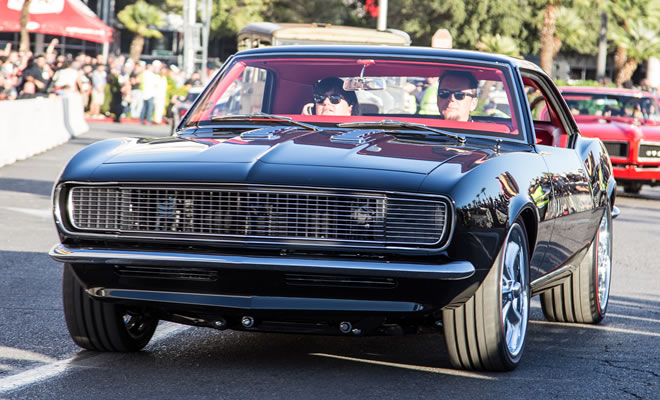 SEMA 2016 Roll out Parade Photos are rolling out of the editing machine as we speak. The SEMA Parade is definitely something you have to add to your bucket list if you are an enthusiast. Walking around the show can get overwhelming with all of the booths, hunting down the cool builds and of course a ton of people you are constantly dodging.

On Friday, almost every single SEMA build that was inside or around the outside of the convention center parades out single file and heads over to the gold parking lot of the Las Vegas Convention Center to the SEMA Ignited car show. SEMA Ignited is open to the public and gives people a chance to bump elbows with their favorite automotive TV celebrities and an opportunity to get up and close to the SEMA builds.

SEMA roll out started around 4PM. The advertised time is from 3PM – 10PM to get the SEMA Ignited event kicked off. SEMA Staff and Board members brought out the top 10 builds of the show. Introducing each builder and their ride. Once that is completed the convention centers unloads. We hung out capturing the evening for a few hours. When we decided to pack up and walk back to the taxi / uber area of the convention center, there was still a ton of cars wrapped around the convention center waiting to roll out. It was an insane sight!

We have a ton of coverage from SEMA and we will continue to work on compiling the photos and video. I did not want to delay publishing our coverage in order to get it all together so I will try to release by some sort of logical category / grouping. For now since I have made my way through the SEMA 2016 Roll out Parade Photos, here they are. I have to break up the coverage into “parts” otherwise the bandwidth police will kick my ass. I now understand why some “Coverage Photographers” only take 30 photos and call it coverage or why vloggers now exist. Compile a 15 minute video with 2 clips of cars and BS the rest of the time and call it coverage, got it. 🙂 Yes, I am just getting old and need to get with the times, I get it.

Stay tuned here at carshowz.com for more SEMA coverage. Be sure to follow our social media channels below:

SEMA 2016 Battle of the Builders

Be sure to follow our social media channels below: