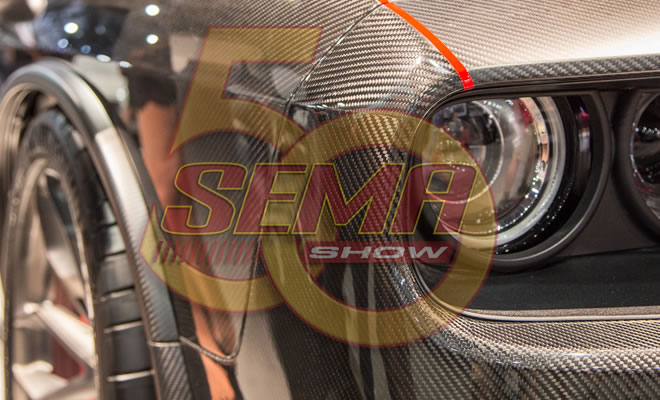 SEMA 2016 Top Builds, with over 2000 photos I can say we are officially tired. The SEMA Show hosted a variety of custom vehicles to include, 4×4 vehicles, lifted trucks, lowered cars and trucks, exotics, hotrods, you name it and it was here! Along with the variety of custom builds the Specialty Equipment Market Association also had a ton of manufacturers in attendance displaying their products. Everything from large lifts, welding equipment, down to hand tools. Even though the automotive industry looks at SEMA to be the super bowl of car shows, the trades is what keeps the market going.

Below you will find highlights from the show and the SEMA 2016 Top Builds of our choice. SEMA Show 2016 is in the books, celebrating 50 years of awesomeness, we are already looking forward to next year! If you have never attended the Super Bowl of the automotive industry, then you need to plan a trip.

The SEMA Show is hosted at the Las Vegas Convention Center and is the premier automotive specialty products trade event in the world. It draws the industrys brightest minds and hottest products to one place, the Las Vegas Convention Center. In addition, the SEMA Show provides attendees with educational seminars, product demonstrations, special events, networking opportunities and more.

With so much to see throughout the week I’m glad I wore comfortable sneakers for as much walking as we did. There is so much to see at SEMA 2016 and very little time. Between all of the halls, the performance pavilion and the displays throughout the parking lots of the convention center and not to forget the skid pad where Vaughn Gittin Jr. and others show-off their drifting skills, it is truly an overwhelming experience.

We wanted to highlight a few of our favorite rides throughout the show and some what categorize them. Please be sure to visit all of our coverage links at the end of this article. There are over 2,000 photos from the event as I tried to cover the event in its entirety and I still need to include Darrell R’s coverage from the week.

4x4s Off-road Vehicles & Lifted – Do you even lift bruh?!

Starting in the South Hall on day 1, we made our way through the upper and lower levels of the hall checking out all of the off-road 4×4 rigs and custom parts. Custom vehicles every where you turn and cool new products at each booth.

Check out some of our 4×4 highlights below…

SEMA 2016 Day 2 we spent our day checking out the Central and North Halls. The best part about SEMA is you never know what you will come across. I felt at almost every turn I was literally running into a celebrity. While checking out Rutledge Wood’s TRD PRO RCSB Toyota Tundra, as soon as I look up, there’s Rutledge explaining the modifications of the Tundra to a spectator.

While capturing the Ford display via FB Live, I was walking through and obviously not paying attention to anyone I literally almost ran into Barry Meguair as he was walking through. I then realized I need to get off my phone and pay more attention to what I am doing. I missed an opportunity to snap a pic with Mr. Meguair, maybe next time.

Continuing to make my way through the halls drooling over the custom art on display, I then ran into Chip Foose who was showing off one of his latest creations the “Madam X” Cadillac in the Glasurit booth.

Dave Kindig, Diesel Dave, Farm Truck, Sung Kang, Magnus Walker, Aaron Kaufman, Linda Vaughn and Courtney Hansen were among the others I had the pleasure of seeing during my SEMA travels. Check out my paparazzi shots below:

Everywhere you looked there were amazing rides throughout the halls and around the convention center. Almost every build we saw was a contender for the SEMA 2016 Top Builds running. Below are a few of our favorites and what we would consider top builds; well-rounded fully built show vehicles that have touched on all elements of a show car. Body, paint, interior, engine, style, wheel fitment, etc. Please note I did try to capture the event as best as I could, there were a few builds I have missed that should be featured below.

To name a few that are included below in no particular order. I tried to list each of our picks below in bullet form:

Truly a jaw dropper, these custom haulers are a work of art. Can you imagine rolling into a car show with one of these rigs, not to mention a rig full of custom rides?

Exotic / Supercars – More than you can afford pal!

Plenty of cool high-end exotic / supercars at SEMA 2016 this year. It’s always cool to see a nice Lambo, Ferrari, Porsche, or a well executed GTR build. Our picks are not exactly categorized by price point or the fastest in the world, but not your typical grocery getters.

Lowered Rides – Bruh, how do you go over speed bumps?!

It was nice to see a healthy selection of lowered rides at the SEMA show. This section is dedicated to the lowered rides we came across, not necessarily all are on bags, just a nice stance with a bit of a tuck.

It is amazing to be a part of SEMA 2016 and to see what the SEMA show brings to the automotive industry and communities. The amount of manufactures, custom vehicles and products that were all involved is an amazing production to be presented in just 5 days.

The roll-out parade was probably my favorite. Seeing all of the cars rolling down the automotive red carpet outside of the Las Vegas Convention Center, listening to the engines roar and the sun shining off of the fresh paint was an amazing sight.

Capturing the event as media during the day was a challenge. There was so many people and it was difficult to line-up the right show. However, I would prefer to capture the event during the day since you can catch the builds open (hoods, doors to see interior, etc.)

To check out more of the SEMA 2016 coverage, visit the links below. Also stay tuned as we still have rollout video we are working on compiling. We also have shots from Darrell Reilly who just joined CarShowz as a Contributing Photographer.