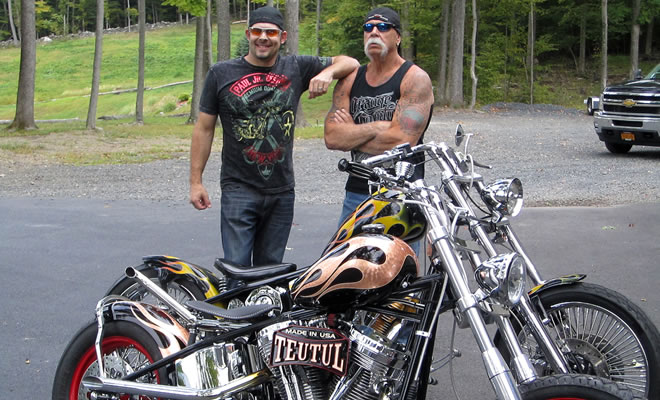 After five years off the air, Discovery Channel is reviving the iconic motorcycle fabrication reality series American Chopper. American Chopper Returns to Discovery reads headlines throughout the interwebz and it’s true. The famously feuding father-son team of Paul Teutul Sr. and Paul Teutul Jr. are back on board as the show’s bike-building craftsmen.

In the new show, the duo “set out reclaim their preeminent bike brands and – hopefully, rebuild some sort of relationship; with A-list celebrities, world famous athletes and Forbes 100 businesses as clients, millions of dollars and their brands’ reputations are on the line with every signature build.”

An update on the duo from Discovery: “The Teutuls have been on a wild ride, and it certainly isn’t ending anytime soon. Paul Sr. has revamped Orange County Choppers – turning it into a complex with a shop, café, bowling alley, restaurant and of course, the showroom – but all that didn’t come without a hefty price tag and he is feeling the burden of a high overhead and a lack of foot traffic. Meanwhile, Paul Jr. has also felt the sting of a rough economy – with his business built solely on high-dollar custom-builds and commissions becoming tougher to come by, Paul Jr. stresses about the long-term stability of his own shop, Paul Jr. Designs especially now that he has his own family.”

The original American Chopper premiered as a special in 2002 and ran for 10 years, airing 223 episodes before being cancelled in 2010 and then was rebooted as the spin-off American Chopper: Senior vs. Junior for another two years.

The popularity of the American Chopper series was like no other show we have seen on air. The ratings were through the roof and quite frankly anytime we published anything about the American Chopper show our website traffic would go insane. We with the Teutul family luck with the show and hope they enjoy themselves more so now versus in the past.

American Chopper returns to Discovery in the winter.