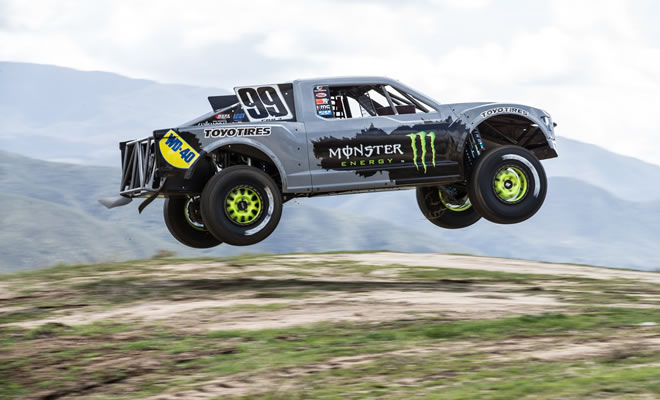 Kyle LeDuc is a professional Baja-style off-road Champion racer who you may recognize as #99 racing the Monster Energy off-road truck. Kyle LeDuc and WD-40, the Challenge: WD-40 Company challenged LeDuc and his team to use WD-40 Special True Multi-Purpose Grease on his truck’s CV joints, bolts and pivots. If the product didn’t work – causing damage to his truck – WD-40 Company would pay to replace the parts. LeDuc and his Team put the product to the test; it delivered and a partnership was born.

It is great to see a company such as WD-40 Company stepping up and marketing their product by becoming a part of the car and truck scene. With a presence at SEMA and now reaching out to athletes such as Kyle LeDuc, it’s a great way to reach the community and spread the word about their product.

Check out more about Kyle LeDuc and WD-40 Specialist Grease testing via the video below:

More about Kyle LeDuc #99: Kyle LeDuc started his racing career in the back yard behind his father Curt LeDuc’s race shop. It all started for Kyle when he began playing with RC cars and bicycles. While his father worked away on his race winning trucks, Kyle was building jumps in the back yard and sending hid RC cars through the dirt. Kyle and his brother Todd LeDuc rode bicycles together almost everyday, this led to an eventual love for racing down hill mountain bikes. The LeDuc brother’s had racing in their blood and found their nitch in the downhill mountain bike scene and performed very well. Both boys won their fair share of downhill championships, and while brother Todd wentpro and continued his journey, Kyle decided to follow his father’s footsteps and started racing off road. Curt told Kyle that if you want to race you’d better build yourself a truck and Kyle did just that. In 2002 at the age of 20 Kyle entered his first Professional off road race and spent the year testing the mud and learning what he needed to know to become one of the best in off road. One short year later in 2003 Kyle, “The Kid” as they called him,  took the title of Prolite World Champion at Crandon International Raceway. This was one of the first of many wins to come. At that point in time Kyle was the youngest driver speeding around the tracks in off road and he was soon just as fast as the legends. In 2004, Kyle’s second full year of racing, he took the title as Prolite Champion. Kyle eventually felt the need to move up into the Pro4 category and did so in 2008. It didn’t take Kyle long to adjust from a 2 wheel drive truck to a 4 wheel drive as he took his first win in his first year. Although Kyle performed well in the Pro4 category, with countless podiums and wins, his next major accomplishment came in 2012 when he won his well deserved title as Pro4 Champion. Not only is Kyle one of the best in off road he also prides himself in being hands on and elbows deep in dirt and grease. Kyle’s been building his own race trucks since he first set wheels on the track as a professional off road racer. Kyle has the mind of an engineer and builds his own race vehicles from the ground up with his own two hands. Expect to see many more championships in Kyle’s off road future.

WD-40® SPECIALIST® SUPERIOR PERFORMANCE TRUE MULTI-PURPOSE GREASE is the only grease you’ll ever need – a versatile solution with properties even lithium greases don’t offer. Reliable at temperatures above 650° F, it also provides marine-grade water resistance and protection against rust and corrosion. Engineered for high-speed and heavy-duty applications, True Multi-Purpose Grease is an excellent choice for maintenance of farm and construction equipment, as well as lubricating machinery in damp conditions. Formulated with calcium sulfonate (OBCS) technology, it is interchangeable with other WD-40® Specialist® greases without compromising performance through cross-contamination. (Source: https://www.wd40specialist.com)