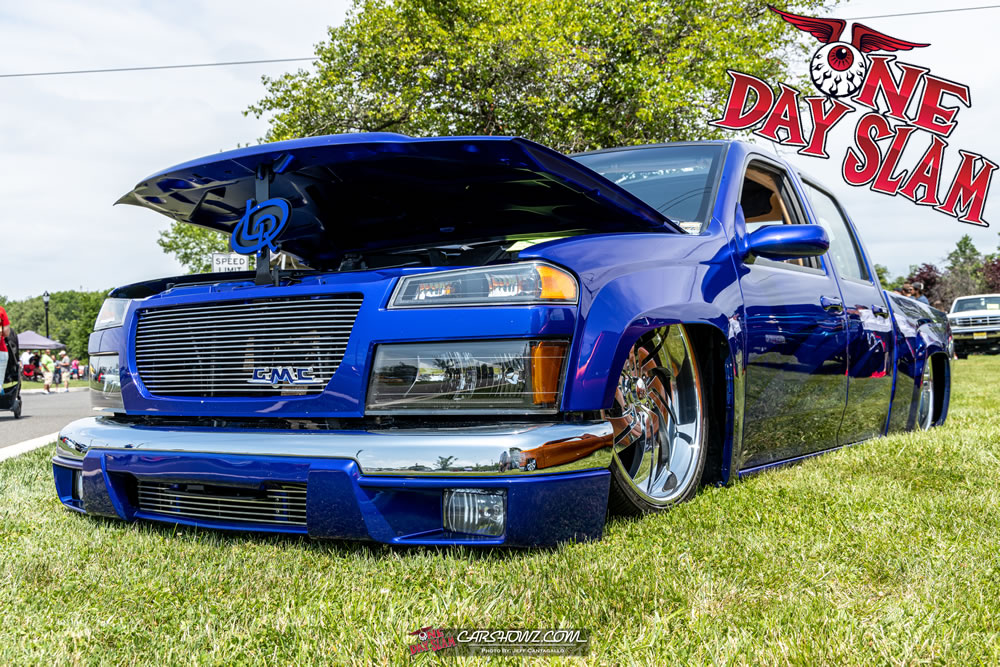 One Day Slam 2021 kicked off in Bristol, PA. with a bit of overcast, but quickly cleared up to make for a great day. Its been 2 years since G4L has hosted the One Day Slam. A combination of The Bristol Parks and Recreation completely renovating the complex and of course the “C” word no one wants to talk about has delayed scheduling the show. There was bit of a challenge with the new layout of the showgrounds ultimately taking away parking spots for the venue. The configuration of the show needed to change slightly to accommodate trailer parking as well as show car and truck parking for the event. The Grounded 4 Life crew adapted and overcame and hosted one hell of a show.

We rolled in at 6AM to start setting up and vendors began to roll-in shortly after. The morning was a bit chilly, which was a nice change of pace from the July hot and humid weather we are used to, when this show traditionally takes place. We planned for an easy day, just a tent, table and some flyers, no shirts or merch. We knew everyone had the itch to get out of their houses and we had a feeling we would spend most of the day catching up with friends as well as snappin’ some pics.

Not long after we arrived vendors began setting up, show cars and trucks lined the streets and started to stack into the show grounds. A flatbed rig pulled up behind our tent which immediately caught my eye, check it out:

While walking around the show, we came across the fully custom tow-truck, lowrider themed and my buddy Whacks pointed out that this build was built in the 90s. 1994 to be exact and it still looks mint inside and out, definitely ahead of its time and an iconic build! More photos of the build is in our gallery below.

One Day Slam 2021 is a sure sign that the car and truck show scene is very well alive and getting stronger. This show brought in a count of 360 rides, there were a variety of custom vehicles from old school hot rods to lowriders, minitruck, classics, 4×4 trucks and even a McLaren, while although stock, it was an opportunity for the kids to check out a cool car.

In addition to the 360 custom rides, the spectator parking and streets were lined with cars where thousands of spectators poured into the show grounds. The Bristol Senior Center had their doors open all day serving, food, drinks and goodies. Not only am I upset that I did not get a show shirt, I also did not get a soft pretzel as both of them were sold out in record time. Yes, I am slacking!

The custom One Day Slam trophies are always a huge hit with the show goers, just something unique to take home to remind you of how awesome of an event G4L hosts.

During the awards ceremony, a couple of the Bristol Senior Center board members made an announcement how the One Day Slam meant so much to them because, of the amount of money they are able to raise for the center and they went on to mention how respectful the show crowd was to them. They mentioned how all of the food was donated, so that 100% of the profits went directly toward the senior center. They also raffled off $760 to one lucky winner! Not only did the One Day Slam scratch the itch of folks being stuck in their houses, this event also contributed and gave back to the community, well done!

Enough of me blabbing, check out the One Day Slam 2021 coverage photos below by myself and wife Jennifer, enjoy.