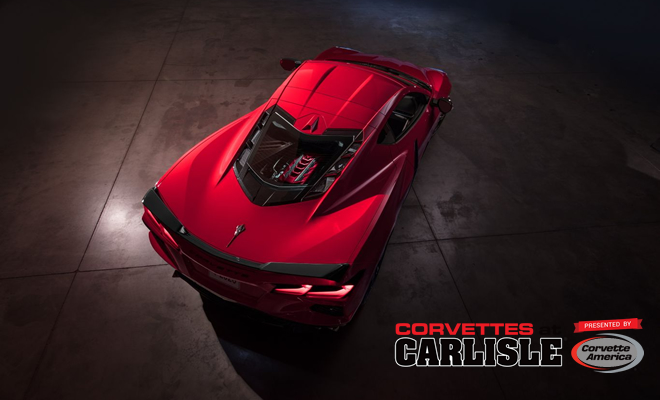 Corvettes at Carlisle 2019 – The largest and most fun-filled Corvette event in the world, the annual Corvettes at Carlisle event features more than 5,000 Corvettes representing all generations of America’s classic sports car. Guests come from around the world for this event – an event that was “name dropped” on the Jimmy Kimmel Live tv show in December of 2018. Corvette enthusiasm is contagious with participation in autocross, burnouts and the parade through historic downtown Carlisle. The excitement continues with an incredible shopping experience, including a huge automotive flea market with a wide variety of vendors, an all-Corvette car corral, Manufacturers Midway and Installation Alley. Check out Rob’s coverage below…

C8!  It’s here and it was on full display at Corvettes at Carlisle on Saturday, August 24, 2019.  The purpose of the show is to celebrate all Corvettes; but frankly, all anyone was talking about was the eighth generation Corvette, commonly known as the C8.  Chevrolet came prepared bringing at least six of the latest generation Corvette, including THE car that graced the stage just last month at the reveal. I spied as many as five more parked in the VIP lot that were clearly driven from Detroit on extended test drives.  In true reveal fashion, Chevrolet presented the C8 on the main stage, attracting quite a crowd. Folks were lined up all day to get a chance to see these cars firsthand and get a chance to question the C8 experts. Some enthusiasts took the opportunity to sit behind the wheel of a C8 for the first time.  Chevy did a wonderful job bringing the C8 to the show and making it accessible for all to see.

After checking out the C8, it was time to check out the rest of the show, which did not disappoint.  The show attracted over 5000 Corvettes from all generations including first generation survivors all the way up to highly modified seventh generation ‘Vettes producing over 1000 horsepower, and everything in between.  For example, there was a fine collection of over a dozen 1988-1989 Corvettes from the short-lived Corvette Challenge racing series. Beyond checking out the many fine Corvettes on display, show goers could find anything for their Corvette including on the spot modifications, new parts, used parts, and even used ‘Vettes looking for a new owner.  There was plenty of Corvette and Chevrolet memorabilia for those looking to upgrade their personal look or their garage. Thrill seekers could put their Corvette on the autocross track for a couple timed laps. For the ladies, Carlisle hosted their Women’s Oasis filled with gifts, crafts, bingo, and even free mani pedis. Corvettes at Carlisle had something for everyone.

This weekend celebrated everything Corvette; but the new C8 stole the show.

What to see more of the C8?  Keep an eye out for our upcoming article highlighting this beautiful masterpiece.

For more car show coverage, be sure to check out our car shows coverage gallery, here.