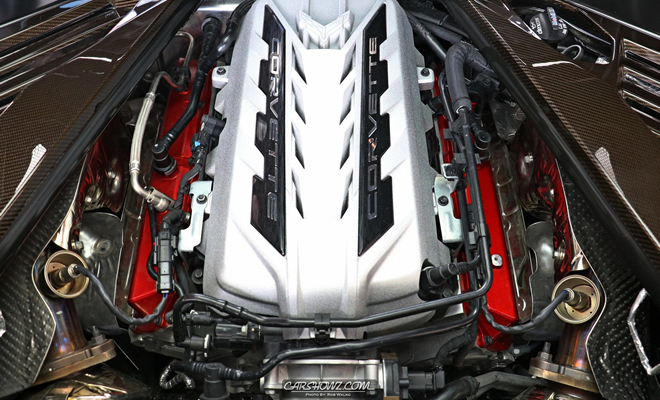 C8 Corvette – The highly anticipated mid-engine eighth generation Corvette, C8 for short, made its Corvettes at Carlisle debut at the three-day event spanning August 23-25, 2019. This was first time many Corvette fans got to lay their eyes on Chevrolet’s latest creation. Personally, I am more of Mustang guy; but even I was excited to see the C8, and for good reason. In my personal opinion, this is the most aggressive yet elegant Corvette GM has ever produced. It has a super-car mystique to match its super-car sub three second 0-60mph time.

Moving to a mid-engine configuration, GM had to move the driver forward 16” and drastically change the shape of the car; therefore, I was curious to see if the C8 still looked like a Corvette. Standing directly in front of the car, the headlights, grills, and pointy nose highly resemble its C7 predecessor. From the side, given the forward cockpit; it is much more Ferrari than Corvette. The hood is much shorter, the cockpit is much more forward, there is a huge air intake in front of the rear wheels, and the rear fenders are much taller. From the rear, the taillights and tapering rear window look like an update to the C7 design. So is it a Corvette? Given that at one point I personally glanced quickly at a C7 and thought it was a C8, I would say yes. But don’t be surprised when you see a C8 next year and mistake it for a Ferrari.

Here are a couple things I noticed about the C8. The interior is minimalistic and extremely driver focused. In fact, nothing in the interior faces the passenger except the A/C vents. It screams, “sit down, shut up, and hold on.” Inside, there is no clutch pedal as the only transmission option is the 8-speed automatic. As one C8 expert explained, if you want manual control, “use the paddle shifters.” In the engine compartment, the engine is neatly tucked behind the driver. Doing maintenance on the C8 will probably be quite difficult as you have to reach over the side of the car. It does appear that some of the panels in the engine compartment are removable giving slightly better reach into some areas. Finally, the C8 comes in eight colors and it looks great in all of them. Chevrolet had red and white C8’s in the main display; but I also got some shots of black, blue, and maroon C8’s parked in the back-lot.

I don’t know much about Corvettes or baseball; but I know enough to call this one a home-run.

Detailed photos of the C8 Corvette by Rob Walko while visiting Corvettes at Carlisle.

To check out more about the 2020 C8 Corvette, visit chevrolet.com, here.

For more car show coverage and photos, check out our photo gallery, here.