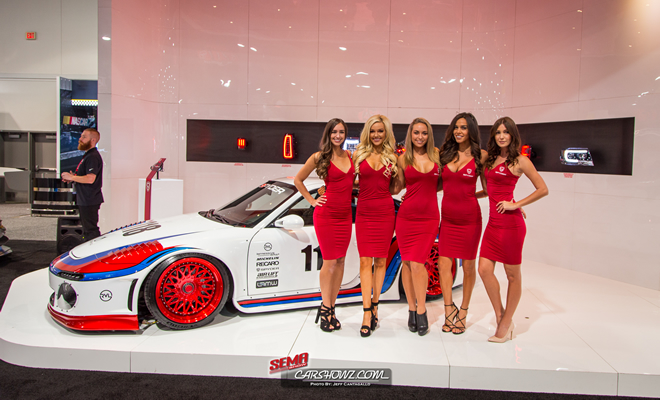 We do not typically create a separate feature section for car show models or in this case Ladies of SEMA 2017. We felt the models added a significant amount of flare to this years event. Most automotive enthusiasts enjoy the cars and trucks at an event. When you introduce a car show model to a photo session or any time we post a photo on social media of a car show model we get a ton of complaints.

“Get her out of the way, we wanna see the car!”

…and a ton of other inappropriate comments I do not want to repeat here. Let’s face it, who doesn’t enjoy the site of a beautiful woman next to a beautiful ride?

SEMA 2017 in attendance had over 180,000 people this year; which makes for a tough time to grab shots of our favorite rides. Of course with media access you get an allotted 30 minute early access and on occasion you may get exclusive access to an unveiling or access to the second story platforms throughout the show.

We strategically used the models this year at SEMA ’17. Photographer Brad Dugenske is an old school import guy, he’s attended several shows throughout his years to include the well-known Hot Import Nights and NOPI Nationals events, so he’s used to beautiful women being around bad ass rides.

Brad got the bright idea to ask the booth models to pose next to some of the rides we wanted to get photos of. Instantly the crowd cleared the way, mostly to gain a better position to get in on the action of snagging a pic. So picture this…100-200 people around a vehicle in a booth a model walks over and the booth instantly clears and makes a path so they can get a better angle to snap a pic. In the mean time, while Brad was talking to the models to explain that we wanted to snap a photo of them with a car, I was already in a good position to snap a photo. It seems elementary, but it is a brilliant idea.

To check out more SEMA 2017 coverage, visit the below links: