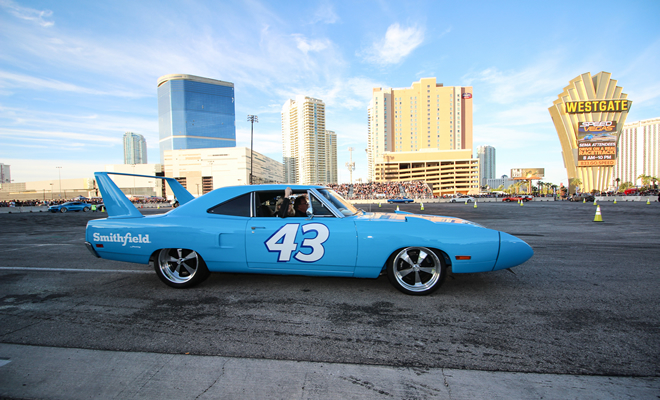 Being in Las Vegas in early November is always a good time. The weather is perfect, you get a bit of a break from the hustle and bustle of work. Being given the opportunity to check out custom builds is always a bonus. The 2017 SEMA Ignited event was definitely on our to-do list this year. If you ever have an opportunity to make it out to Vegas during this time, you definitely should add SEMA Ignited to your list.

SEMA Ignited is open to the public and it is considered the after-party of The SEMA Show. SEMA is a 4 day event, held from Tuesday through Friday. Friday late afternoon the custom builds start to roll-out from the Convention Center and parade themselves to the Gold Lot. We know there is an on-going joke about SEMA builds not being able to run, watching the roll-out parade will put you into a different mindset. Not only are the builds amazing to see up close, but watching them roar down the strip is equally amazing. Sure, you will have a build or two that are put together last minute and may not be complete, but the amount of work that is executed is pretty damn cool!

By the time Friday rolled around I was exhausted. I don’t know if it was the “beverages” I drank a couple of nights before or perhaps the combination of that and eating a calzone at 10PM at night. Yes, I am getting old, but when Friday was here, I was ready to relax. 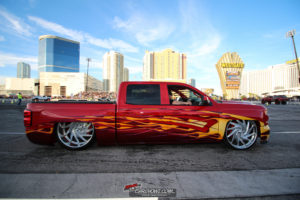 The logistics of trying to figure out where we needed to be media wise was a bit challenging. Physically we knew where to be, but the times to check-in was not communicated very well between the gate security people and the media reps. In order to secure a decent spot we waited ~4 hours until the roll-out. We could not leave to use the restroom or we would need to forfeit our media vests. In the end it all got worked out and with Mark Pantalone heading over to the Gold Lot early he was able to capture the event from his vantage point. Oh and we were finally able to go to the bathroom. 🙂

The Team took a couple of hundred photos each from the convention center side and then we made our way to the Gold Lot to join up with Mark. We continued to add to the mileage of our 12-14 miles a day walking distance. After walking to the Gold Lot, we grabbed a bite to eat and started to track down Mark. We made our way to one of the media pods as the rides rolled into the Gold Lot. This was a perfect area, because it gave us a great view of the builds rolling in and gave us a chance to get up close and personal. We hung out at the first media station for about 30 minutes, maybe an hour.

We then headed over to the second media station which was right alongside of the Formula Drift track that was created for the 2017 SEMA Ignited. That’s when we ran into Mark, sitting in a chair, propped up against the jersey wall like he owned the place. Mind you, none of us sat for most of the day, only for a brief moment to grab a bite to eat. Mark was straight-up hanging out with his camera on the wall snapping away. I will admit, out of the entire trip, Mark’s Ignited roll-in shots into the early evening with the sub going down and the hotels in the background are one of my favorite sets.

The highlight of the evening was watching Max Verstappen tear it up in his Mobil 1 x Red Bull Racing Formula 1 race car on the Formula Drift track. You can check the video out here (scroll down). Note only did we all have a great time, we were able to help promote the SEMA Ignited event and we were excited to see how successful the event was.

I will not continue to bore you with our travels, you can check out the 2017 SEMA Ignited photo coverage below and be sure to check out the above video, that was a cool experience!