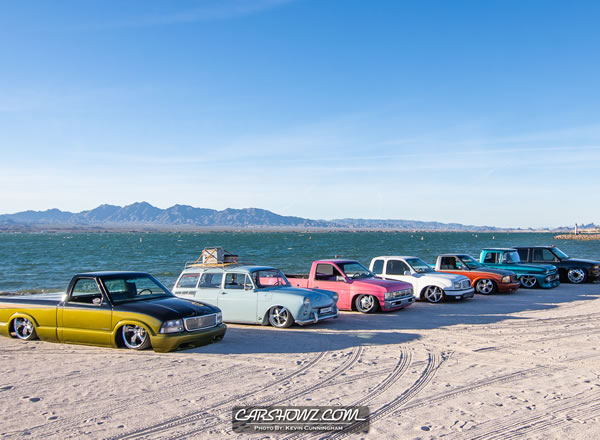 I love going on adventures, I love driving to places I’ve never been, and I love car shows.  When Jeff floated the idea of me going to Resolutions 2018 I jumped at the chance.  Life is always hectic but sometimes a trip out to a show is just what’s needed.

As the end of the year drew nearer and nearer, I continued to put off finding a hotel.  I’m pretty sure it was my lizard brain forcing me into turning the Resolutions trip into a camping trip as well.  Thursday night I packed 4 different blankets, a low-temp sleeping bag, and my gear into the back of my adventure vehicle.  I’d never been to Lake Havasu before and I had a feature lined up for the show so, I was pumped during my 8 hour stint at my day job on Friday.  Finally, 2:30 rolled around and I rolled out.

About 10 minutes into my drive heading west on the I-10 I was met by a rolling fortress of a roadblock that consisted of dozens of 18-wheelers and California drivers who couldn’t decide whether 95 mph or 60 mph was the most appropriate speed for their vehicles.  I-10 in that portion of Arizona has a speed limit of 75 mph.  I’m pretty sure that there wasn’t a single automobile on that stretch of road that was driving correctly.  I finally split north after a couple hours and it was smooth sailing from there.  Arizona is such an amazing place with its varied landscapes that seem to jump up out of nowhere.  One minute I was driving through a typical flat desert and the next I was in mountainous foothills.

I arrived to the BLM campground much later than I had expected so I set up my rig for comfort and called it a night.  I slept in a bit on Saturday but, headed out to the Resolutions show ground shortly after they opened.  The set up was great!  The show took place in a large parking lot right next to a beach park on the eastern shore of Lake Havasu.  It was chilly and windy all day but no one seemed to mind.  There were multiple food trucks (and a beer truck!) on hand, beach access from the show, and easy access to gas stations and restaurants.  The location was also a short walk to the famed London Bridge.  Yes, the real one.  In 1967 it was dismantled from its resting place over the River Thames in London and reassembled over Lake Havasu in Arizona.  I have to admit, it wasn’t nearly as large as I expected it to be but it was definitely a cool sight.

In the interest of journalistic integrity, I do have to admit that the show itself was smaller than I was expecting.  However, in my personal opinion, that didn’t detract from the show at all.  I believe I read that there were less than 100 vehicles showing but I have to say, it was probably the most fun I’ve had shooting a show.  That’s not to say that I don’t enjoy walking around a field with upwards of 2000 vehicles but at Resolutions I was actually able to take my time.  I didn’t feel rushed or pressured to get a shot of every single ride and possibly let someone down.  I was able to walk around the vehicles at Resolutions, single some out for lakeside shots, and really take in what I was experiencing.  Sometimes, with the larger shows, it’s all about how many rides I can photograph before I run out of energy or time.  It was refreshing that I was able to slow that process down at Resolutions.  I was able to take time to be an enthusiast as well as a photographer and it felt good.

I will also say that, even though I’m greeted warmly at most shows, I don’t often have time to mingle or network.  I’ve never felt more welcome than at Resolutions.  I had more conversations with fellow enthusiasts than I have at any other show I’ve gone to.  Typically it’s me out there by myself, snapping shots as fast as I can before the show shuts down, and interacting with maybe a handful of people.  Resolutions was different and I think that’s important.  It’s an important part of the culture and I know I’m not the only one who sees that idea of “community” diminishing.  It was out in full force at Resolutions.  Every time I looked up there were groups of club members huddled together in conversation.  They weren’t just amongst themselves either.  There was a lot of cross-club interaction and it felt really good to be there; to be a part of it all.

I got called about a family emergency in the late afternoon so I stayed for my feature with =Sunset= Lake Havasu City President Jay Johnston and then I left for home.  It may have been smaller than expected but Resolutions 2018 was a win for me.  I’m looking forward to the next Resolutions and my next trip to Lake Havasu!  Thank you to =Sunset= for hosting and showing me such warmth and acceptance!  Enjoy the photos!