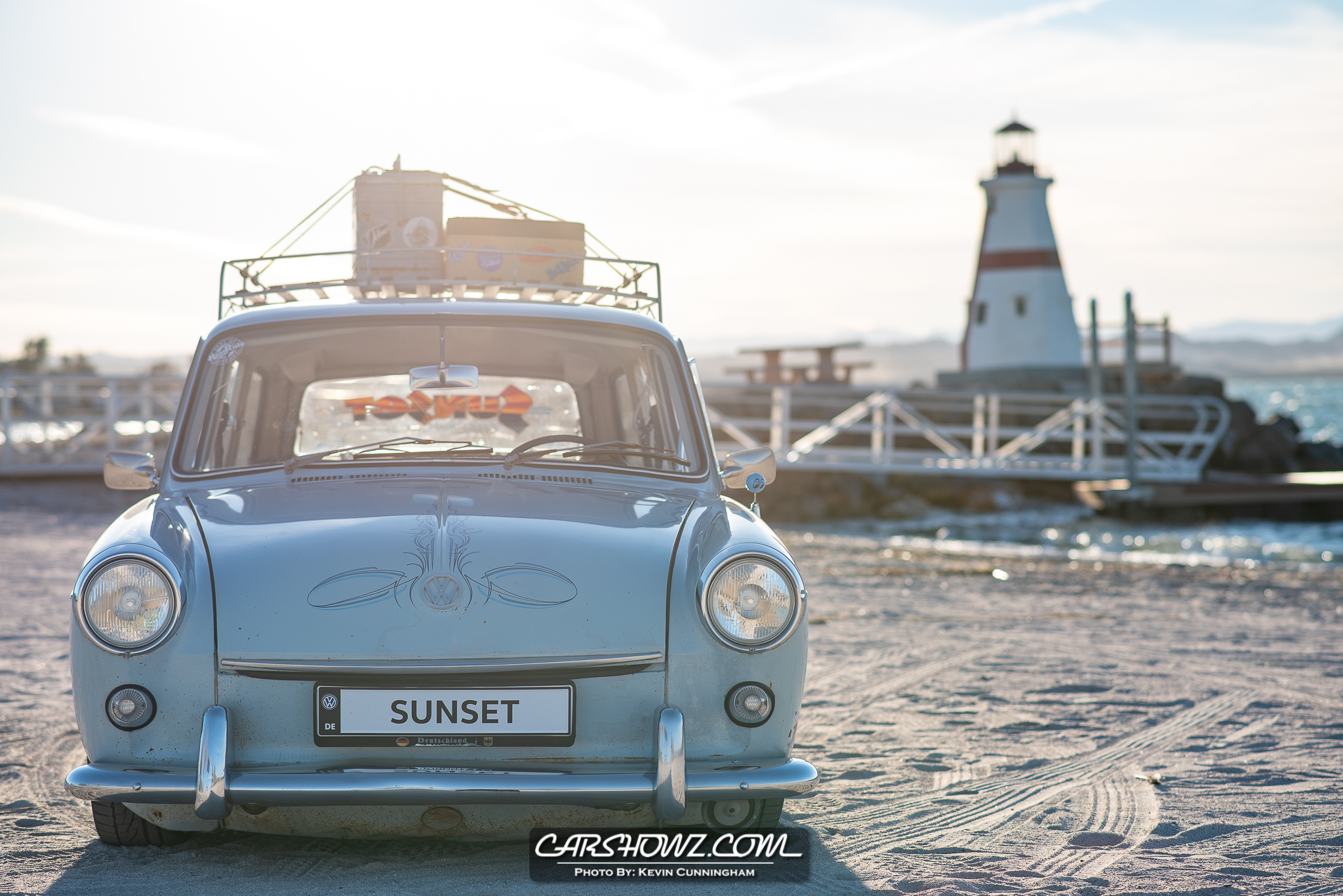 Kevin Cunningham and Jason Johnston teamed up in Lake Havasu City, Arizona to bring to you this awesome feature of Jason’s Volkswagen Type 3 Squareback.

CarShowz.com was created 10 years ago, to create and capture a calendar of local automotive events for enthusiasts. A couple of years into creating the website we have expanded into photography and automotive event coverage. This feature among many others we have published is exactly why we do what we do, preserving automotive history and sharing stories. We want to thank Jason for taking the time to interview with Kevin and for Kevin who is constantly killing it with his photography and journalism.

Kevin Cunningham: Tell us a little bit about yourself.  Where did you grow up?  How did you get into the automotive scene?  What does the scene mean to you personally?

Jason Johnston: Well I grew up in So Cal, the Whittier / La Mirada area.  Ever since I was a kid I’ve been around and into cars.  My dad was into the old muscle cars, and a lot of my friends were into either off roading or minitrucks.  Obviously something with the mini trucks and the customization caught my appeal and I’ve been hooked ever since.   But the one car I was always a huge fan of, was VW’s.  No one I knew was really into them and I never really had an opportunity to buy one until a couple of years ago when I decided to build something old school and different.

What does the scene mean to me personally?? Well that’s a tough question to answer.  People I consider family are in the scene, but honestly, I think the mini truck scene has changed a lot over the years and is still changing.  I’m not one to try and keep up with the latest trend or how crazy and different can I be from the rest of the crowd; I’m building something I’m into with the influence I’ve had over the years from the scene.  I’ve found a few people who really dig the old VW builds with a mini truck style to them, but other than that not too many people really are interested in it.  I’ve been attending a lot more VW events this last year or two and have really enjoyed the people and atmosphere with that group as well and will definitely be making it to a lot more VW events.

KC: Would you mind sharing the story of the Volkswagen Type 3 Squareback?  What is the history of the car and how did you come to own it?

JJ: My friend had found the car buried in a backyard here in Lake Havasu City surprisingly.  It was from the grandson of the original owner and was a California car, still with the black and yellow plates on it.  It was all original and unfortunately the sun had beat it up pretty bad so it needed A LOT of work. My buddy hit me up and I got ahold of the owner and we worked out a deal and picked up the car for $800!

KC: What has the process been like to get it to where it is?  Do you have any memorable stories about the build?

JJ: The ’68 has been a love hate build!  If you’ve never dealt with a Type 3 VW it would be hard to understand.  These cars have kind of been the step children of the VW world and parts are hard to come by or are super expensive when you do find them.  Everything on this car has been either rebuilt or replaced with new.  Most memorable thing was the learning curve with this thing.  I grew up around hot rods and mini trucks, where parts are easy to get and suspension is like most other cars.  With this thing it’s been a roller coaster, but I guess that’s what VWs do from what everyone says.

KC: What has been done to it?  Any special mods or components you want to highlight?

JJ: The first thing I did was try and get the original Fuel Injection system working, thinking it would be awesome to say it had the original FI set up since these were the first year a car ever had an FI motor.  But that quickly turned out to be a horrible idea.  Since these FI systems were so old, no one made replacement parts for these and anything you did find was refurbished or used and eventually failed.  So I swapped it out for carbs until I could finally afford a custom built 1835 motor by Geoff Hart performance here in Lake Havasu City.  I hit the body with a good cut and buff, bringing out the old shine from the original paint job.  I’ve replaced the front suspension with a dual bag, split independent, ball joint front beam from Punch Drunk Customs.  The rear end I custom built, swapped it out to an IRS setup and put a cross bar with bag plates on the bar and IRS arms to get the rear to lay out.  I swapped the brakes out to a wide 5 (5×205) pattern and threw on a set of 17 inch Escaras.  They’re a little wide right now, but they’re going out to get narrowed soon so the front will tuck the rest of the way like it did before with the skinny factory wheels it had.  The air management is set up with parker valves, AVS controller, Viair compressors, and Slam Specialties bags.  My good friends over at Crash Customs here in Lake Havasu City painted the candy blue on the air tank and redid the upholstery on the seats.  My friends and I stretched a new headliner and replaced the rest of the interior pieces and put new window rubbers in from ISP West.  Mr. OZ laid down some blue and white pinstriping on the hood, trunk and glove box to give it a little style.  I ordered a custom rear safari window from Jeremy Brooks at VWLoosenuts and installed that in the rear hatch for a killer old school safari window look.  Recently I added a Coolrydes Customs short throw shifter and a performance stainless steel exhaust from A-1 Performance Exhaust which has made a huge difference in the way it runs.

KC: Previously, you mentioned to me a pretty sweet audio upgrade that’s in the works.  Tell me a little bit about that.  Do you have anything else planned that we should keep an eye out for?

JJ: Yes, unfortunately I haven’t been able to get the stereo finished yet, but it’s planned out and in the works.  A local shop owner here in Lake Havasu holds the world record in a variety of classes of competition stereo performance; Michael Hughes at Speed of Sound.  Him and I have been working on getting a set of 6.5 DD Subwoofers set up in two custom boxes along the rear fender side panels, and some custom kick pods down along the front foot rest area with some Rockford Fosgate components, all powered by Alpine PDX amps to make it crank.  Once it’s all done it’ll be wrapped in black leather with a French stitch along the seams, and I’ll redo the door panels to have a matching design up through the front; again done by the amazing crew at Crash Customs.

Been trying to get my hands on a safari front windshield, but not sure I’m going to be able to convince the builder of my rear to build me one for the front as well, so my goal is to try and get one completed myself to really set of the look of this thing.

KC: You’re associated with Sunset.  What are they all about and what drove (pun intended) your decision to join that specific club?

JJ: I am with Sunset, just hit 10 years with these guys.  I am the president of the Arizona chapter and everyone of these guys in my club are family.  Its always been that way.  I grew up in the Whittier, California area where the club started.  A few of the members at the time went to my high school, so I’ve been hanging out with these guys for years and they just grew on me.  Once I finally got my first minitruck there was no question as to who I was going to join and represent across my back window; SUNSET.  I can go anywhere in the world we have a chapter, hit them up, and have a great time and a place to crash, that’s the type of members Sunset has; Family.

KC: Is there anyone you want to give a shout out to or anything else you’d like to add?

JJ: One thing I noticed since I started building this and started attending VW events, is the spot light for the Type 3 community has been slowly growing, but still not as noticed as the Bugs or Buses.  So I started a clothing line called Type 3 Syndicate to try and get some new and fresh views towards the community.  That and it gives us Type 3 owners a little more Type 3 Schwag to represent our community as well.  Hopefully in the future I’d like to be able to have not just a wide variety of shirts, hats, stickers, but also a few custom components to offer for the people in the Type 3 community.

I want to say thank you for taking the time to do a shoot on this, never thought I’d have something I owned have a shoot and write up done.  I want to thank my wife for putting up with my crazy late nights working on this, my friends for helping me out when I needed a hand either on the side of the road or getting it back on the road.  To the awesome people I’ve met in the VW community because of this car. And a shout out to everyone who’s helped me along the way.  If anyone is looking for great aftermarket parts, custom components, or custom work done,  hit up Mark Ulves with The VDub Hub, Jeremy Brooks at VW Loosenuts Safaris, Kevin Zagar at CoolRydes Customs, Geoff Hart at Geoff Hart Performance and Machine, Tiger at A-1 Performance Exhaust, Ronny at Bustoration, Crash and Kristen at Crash Customs,  Michael Hughes at Speed of Sound, and don’t forget to check out Type 3 Syndicate on Facebook and Instagram to see the new line up of hats, shirts, and stickers and get your new gear to represent the coolest types of VWs, the Type 3.

We would like to thank Jason again for his time and for sharing this amazing build. Again, Kevin Cunningham for taking the drive to Reso (4 hours) to capture the Volkswagen Type 3 Squareback and the feature.

We are always looking to capture history and the story behind your build. If you have an interesting build (new school or old school) contact us (click here) and maybe we will see you on our next feature.