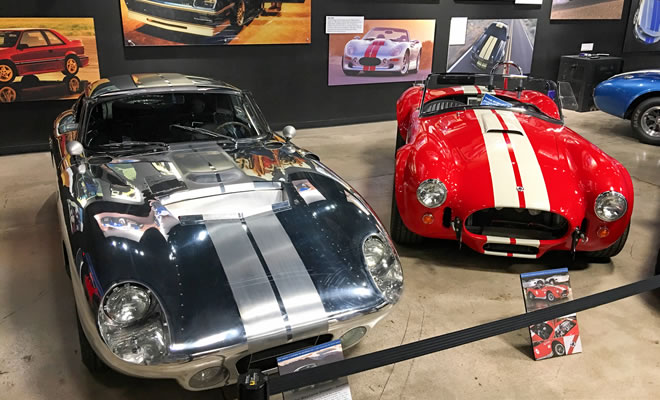 Shelby American Inc. has several locations in California and Las Vegas, Nevada. We were fortunate enough to visit the Ensworth St., Las Vegas, NV. location where the primary focus is high performance parts, apparel and merchandise. The highlight of this tour was the museum packed with Shelby’s signature vehicles along with the work shop where you can get a glimpse of the actual work being performed on some awesome vehicles.

Walking through the showroom / museum was surreal, lots of awesome rides that displayed years of history that has preserved the Shelby iconic name and brand. Check out some pictures below.

Shelby American Inc., a division of Carroll Shelby International, Inc. (CSBI.PK), is the premier independent performance car company in the United States. Committed to delivering cars and products that provide an unparalleled driving experience, the company has been at the forefront of automotive innovation since it was established in 1962.

The company was founded by Carroll Shelby, one of America’s greatest race car drivers. He dominated sports car racing success in the mid-1950s, twice being named Sports Illustrated’s “Driver of the Year.” His crowning achievement as a driver came in 1959, when he won the 24 Hours of LeMans.

With changes in government regulations looming and skyrocketing fuel costs, Shelby American ceased building production cars in the late 1960s; the company evolved into a performance hot spot that consulted special projects for automakers. This included the development of several key vehicles for Chrysler that helped restore the struggling car-maker’s image. Among those legendary vehicles was the Dodge Viper, which sparked a new super car competition among auto manufacturers in the United States. Shelby even drove the new Viper as the pace car during the 1996 Indianapolis 500.

In 1996, Shelby American, which was named Shelby Automobiles for a few years, opened a manufacturing facility at Las Vegas Motor Speedway. From this new state-of-the-art facility, the company began to build continuation Cobra 427 S/C, Cobra 289 FIA and street Cobra component vehicles. While still true to their heritage, these genuine Cobras incorporate subtle updates to make it even more enjoyable to own than those built in the 1960s.

Ford Motor Company asked Carroll Shelby and his team to consult on the Ford GT in 2004. Two years later, Shelby and Ford formed a new relationship to once again build high performance vehicles. That program accelerated in 2005 when Carroll help re-energize the company with a new series of high performance vehicles built in cooperation with Ford Motor Company. Working with the Ford Racing, Ford SVT and the Ford new car branding team, the relationship resulted in a string of cars that returned Shelby vehicles to the top of enthusiast wish lists worldwide.

Forty years after their pioneering effort in 1966, Shelby, Ford Motor Company and The Hertz Corporation once again joined forces to build the ultimate weekend getaway vehicle, the Shelby GT-H (H for “Hertz”). Based on the Ford Mustang, the Shelby GT-H was instantly recognizable with its deep black exterior set off with gold Le Mans racing stripes. This steed was fitted with a custom Shelby Performance hood with pins and a brushed aluminum grille with running horse emblem. And with the help of Ford Racing and a 325HP 4.6-liter 3V V-8 engine, this machine was pure American muscle.

A total of 500 coupes were built for rental through select Hertz locations in the United States during 2006 and 2007. The next year, an agreement was announced to build 500 convertible Shelby GT-H rental cars.

The strong demand of the GT-H, from over 3,000 dealers and thousands of enthusiasts nationwide, led to the birth of the Shelby GT. Powered by Shelby and Ford Racing Performance Parts, the Ford Shelby GT boasted out-of-this-world handling, stick-to-the ground cornering and dust-the-competition acceleration. The pony car was equally at home on the track, a daily commute or out on the town. Each limited edition convertible and coupe has a serial number that is recorded in an official Shelby factory registry. Unlike the GT-H, both manual and automatic transmissions were available in the Shelby GT.

In the 1960s, Shelby offered a myriad of parts to step up the prowess of their Mustang. Four decades later, Shelby and Ford Racing teamed up again to give Shelby GT500 and Mustang GT owners the opportunity to customize their muscle cars.

These programs include the Shelby Super Snake, Shelby GT and Shelby 1000 packages. Owners arrange for their car to be drop shipped by the Shelby Las Vegas facility for conversion or a customer can arrange to have a properly specified car transported to the factory. In the 1960s, Shelby offered a myriad of parts to step up the prowess of their Mustang. In addition to the Mustang based Shelby vehicles, Shelby American has a program to enhance the 2011-14 Ford Raptor.

In 2007, Shelby created a company to give SN197 owners the opportunity to enhance their vehicles with new high performance and styling parts. Shelby Performance Parts offers a full complement of parts developed through key partners and their own R&D program for the Ford Mustang, Shelby GT and Shelby GT500.

For those with vehicles far from Las Vegas, Shelby has established a series of mod shops. Staffed with trained Shelby technicians using specially engineered and Shelby approved parts, these locations give enthusiasts the ultimate factory makeover with unrivaled parts and performance options from Shelby-authorized professionals. These locations, as well as ones internationally give customers the opportunity to have a Shelby package installed on their car and purchase genuine Shelby Performance Parts locally. (source: shelby.com)

If you are ever in Las Vegas and have some time, we definitely recommend you check out this landmark. A ton of history and lots of cool rides you will not want to miss.