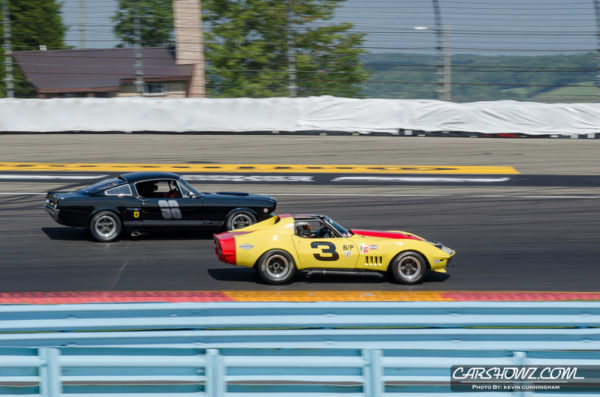 I grew up in a town called Horseheads, New York. I lived directly off a 55 mile-per-hour two lane road that linked many small towns. If you were to follow that road north for 15 miles you would end up in Watkins Glen, New York.  Why is that important? Because that is the exact route that NASCAR teams take when they’re hauling their race cars to Watkins Glen International. NASCAR races at “The Glen” were a huge deal when I was growing up, my siblings and I would go stand twenty feet from the road as these gigantic trucks roared by carrying their precious cargo and we would do our absolute best to get them to honk.  Some did and some didn’t, but I think the most tragic part about this story is that I never once made it to The Glen for an event.  Even though the track was maybe 25 minutes from my house I’d never been there.  That changed on September 9th and 10th of this year.  Thanks to the illustrious people who run this page, I was there and it was more than I ever could have dreamed.

I arrived at Watkins Glen International (WGI) on Friday morning to get my pass and figure out where I was going to be shooting from. I then planned to go cover the Grand Prix Festival in downtown Watkins Glen (check out coverage here from the Festival:  https://carshowz.com/watkins-glen-grand-prix-festival-2016/). Well, once I figured out that my parking spot was in between two of the paddocks and about 10 feet from the pit entrance I decided to stick around for a bit. Never once in my life have I experienced anything like I did that morning. Privately owned stock cars and Lotus race cars hitting the intersection where an old Aerostar van was preparing to turn left, the sound of engine preparations pierced the air, pit bikes raced in every direction, and there I was doing my best to keep my jaw from hitting the dew-covered grass. It was unbelievable to see all of the beautiful Motorsport machines lined up under their canopies and driving around as if in the middle of Suburbia. Unfortunately, my time at the track was much too short on Friday but, I made up for it on Saturday.

On the 10th I got to the track as the gates opened and prepped my gear. I had scouted the perfect spot to start shooting on Friday so I made a beeline for it immediately. I got set up, took some test shots of a familiarization lap, zeroed in my cameras, and it started raining. It was a drizzle but it wasn’t quite a downpour. Surely they’d shut the track down until it dried out, right? Absolutely not! They ran right through whatever the weather threw at them. It rained for a couple hours and then the sun made its dazzling debut. Never once did the wheels stop spinning or the engines stop turning. I saw vehicles shoot past me at well over 100 miles-per-hour that I had never seen or heard of before that day. The Sportscar Vintage Racing Association (SVRA) was out in full force and I was absolutely blown away. Not only were the vehicles beautiful but, they performed fantastically on that deceptively tricky course.

During one of the endurance events I moved my feet to a location an arm’s length from the course to catch some head-on shots. It was hands down one of the most frightening places I’ve ever taken photographs. As the vehicles exited “the esses” they appeared to be aimed directly at the spot I was standing and sped past less than ten feet to my right. The engine and exhaust noise was both deafening and exciting. I almost lost my nerve when the stock cars, F1, Can-Am, and Indy cars hit the track while I was standing there and utterly failed at capturing any side-view panning shots from that location; they were just too fast and I’m not afraid to admit that.

The third spot I thoroughly enjoyed capturing was right at Turn 1. It was the perfect spot for panning shots and also where I was able to capture the photos in this set I am most proud of.

I really hope you enjoy the multitude of photographs posted here and I HIGHLY recommend attending any event that includes so many unique vintage vehicles.