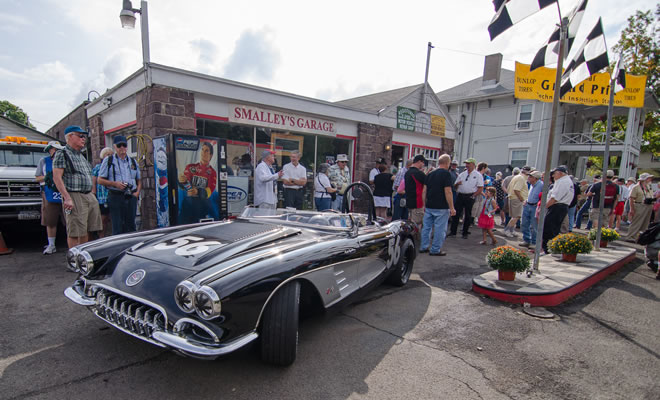 Organizers shut down the streets in October of 1948 and held the first sports car road race of the post-World War II era. An unfortunate accident in 1952 saw the Grand Prix moved to an area that would later become Watkins Glen International (the Glen for you NASCAR folks) but that didn’t remove the racing spirit from the town. In 1993 a celebration of that spirit was created in the Grand Prix Festival of Watkins Glen (presented by Chemung Canal Trust Company).

The annual one-day festival features a number of events that pay homage the Grand Prix of old including the pre-race inspection at Smalley’s Garage, the Stone Bridge Driver’s events, and the Walk of Fame which honors participants of the 1948-1952 Grand Prix. The festival draws tens of thousands of people and thousands of participants.

I spent the morning stopping at Smalley’s Garage for the tech inspection, fawning over the vehicles entered into the Concours d’Elegance, and taking in as much as I possibly could. In the afternoon I set up at Cornett’s Stone Bridge. The bridge is so named because Denver Cornett flipped his MG into the creek at this location in 1948 during the Junior Prix but he righted his vehicle, borrowed parts, and finished the Grand Prix! I spent multiple hours in one location snapping my shutter and trying not to drool on myself. Although I did everything I could to capture every vehicle traveling across the bridge, you’ll see that the below coverage photos cover merely a fraction of those vehicles.

I would like to take this opportunity to thank the organizers, participants, and spectators of the Watkins Glen Grand Prix Festival for honoring the racing spirit of Watkins Glen and for allowing a car nerd like me to have such a fantastic time!