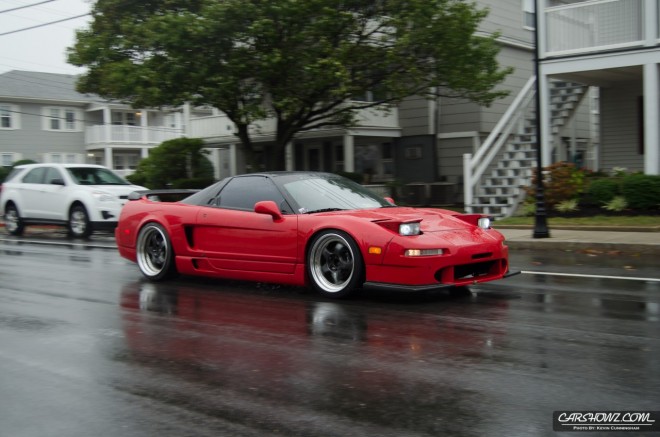 H2Oi 2015 is a wet one, but that’s not stopping enthusiasts from heading down to Ocean City, MD. to have a little fun and to wreak havoc. Kevin Cunningham is braving the elements this weekend to provide coverage for us here at CarShowz.com. Social media accounts will be pouring with H2Oi coverage throughout the weekend, keeping those who melt in the rain up-to-date with all of the latest incidents, unique rides and more. If you are into keeping up with the latest H2Oi Shenanigans, follow Instagram user “OCPD Roll Call“, they are a great source for collecting photos and incidents around OC as they are tagged in almost all of the ‘jackassery’ going on. Our friends at Mischief.tv are also down in OC this weekend, follow them at, “mischieftv” to keep up with the latest as well.

I woke up on Friday, October 2nd in an adventurous mood. Hurricane Joaquin was supposedly heading north, towards the Mid-Atlantic region of the East Coast and I had readily accepted to cover 2015’s H2Oi event in Ocean City, Maryland for Carshowz.com. I packed up my gear around 10:30 am and headed out the door. My mind was racing with what to expect. I’ve been to the Ocean City Car and Truck Show almost every year for the better part of a decade so I know where to go, generally what to expect, and the vibe of the “scene.” H2Oi is new for me so what was it going to be like?

H2Oi is an annual 2-day VW/Audi rally held at the Fort Whaley Campground just outside of (and ends up spilling into) Ocean City, Maryland. Organized by Jay Shoup, this event has caused tensions to flair in the past. Many participants have called for a boycott of having the event in Ocean City due to the overwhelming number of traffic stops and tickets handed out by the Ocean City Police Department. Residents of Ocean City have absolutely nothing good to say about the participants and their activities. Earlier this year Shoup spoke to Maryland Coast Dispatch about strengthening ties with the Town of Ocean City and stated plainly that he has “told the Ocean City Police Department and the Maryland State Police to ticket, impound and arrest any fool who cannot obey the same laws that I am expected to obey.” He cited participants who bring in vehicles other than Volkswagen and Audi as being the source of trouble for the event.

I’ve seen the memes floating around the internet about police activity at H2Oi and I’ve always wondered if the hype was true or exaggerated. As I pulled onto Coastal Highway I immediately saw the lights of an OCPD vehicle. “Well, I guess it is true” I thought. The second thing I noticed was that two-thirds of the traffic was composed of modified vehicles. I drove south to Route 50 to get a feel for the event and to see what participants were doing. I passed many parking lots with modified rides lined up in parking spaces and got passed by plenty of lowered German hatchbacks as I scanned the sides of the road. I got to 9th Street, found a Parkmobile spot, and tucked my jalopy in it. I grabbed my gear and hit the streets. The first thing that hit me was the exhaust sounds. Well, really, the first thing to TRULY hit me was the wind and rain, but the exhaust noises were a close second. I don’t think anything gets me more excited about a car event than the scratchy, throaty cacophony of exhaust. It’s iconic sound to be sure and it got me pumped up. I walked to the end of the street and watched as a WRX, an Evo, and a couple of GTIs rolled past. It never stopped. The entire time I spent walking up and down the main streets I was passed by a myriad of makes and models. Two Lotuses up there, a group of 8 VWs here. A line of Hondas parked at the curb, a BMW and Audi TT cruising down Coastal Highway. A vibrant orange VW Thing with no front doors passed by and further up the street a silver BMW sat in front of a residence with phrases in painter’s tape along its side. All of these experiences and more within the first few minutes. It didn’t stop.

Cruising seemed to be the word of the day as line after line of modified rides pulled U-turns at traffic lights just to do it again further along. One thing that was noticeably absent from my time there was traffic stops. The only vehicle incident to involve OCPD that I witnessed after the initial BMW was a fender bender between three cars at a light. Outside of that, police activity was relegated to putting down cones and cruising alongside the rest of traffic. If you follow @ocpdrollcall on Instagram then you know traffic stops are happening almost continuously (along with engine fires and burnout contests) but they were strangely nonexistent while I was there.

Unfortunately, I had to leave after only a couple hours but my coverage will continue Saturday and because of that I am extremely grateful. Not only because I get to feel like a kid in a candy store again but because I was impressed with what I saw. The majority of participants were driving responsibly (I’m not talking about the FR-S that backed up away from a State Trooper after a burnout. It may have been cool but if that was you, you should really think about taking that video off of your IG account because MDSP doesn’t mess around) and that speaks volumes to the maturity of the scene. H2Oi, despite the dreadful weather and the impending hurricane, you have won me over. Congratulations.

Subaru Playing in the Water